The American novelist Saul Bellow once spoke about “the tyranny of perceptions,” those evanescent opinions that daily flood our society and divide it. He was concerned that these were being substituted for basic reasoning.

As we know from the work of Aquinas, forming the image of something in our minds is not the final step in the process of knowing. Rather, there is something more that we have to actually do and that is compare the idea in our minds with the reality that we are confronting. So forming an image of what happened at a police-involved shooting, for example, is not worth anything unless it agrees with the facts. Those would be the facts uncovered over time by the medical examiner and the other experts.

Similarly, when most people work with ideas about the Church, they are statistically more often under the tyranny of some half-formed perceptions rather than fully-formed ideas that actually represent the real Church and its teaching. Some people I speak to have created for themselves – remember this is going on within their own minds – a disconnect from the Church as a living and present community. Then their thinking about the Church is not really about the Church, but their own wandering, lost among their own poorly formed ideas.

As with every other part of the human condition, the Church, from her vast experience, has developed tools to heal us, in this case, of our poorly formed ideas about the history of salvation and our place in it. And one of them is known as the Office of Readings.

As you know, the Office of Readings is part of the official daily prayer of the Church, one of the means by which the community makes a serious effort to sanctify the hours of the day. As usual, many ignore the various daily Church disciplines, foregoing things such as daily prayer and daily Examination of Conscience.

But the Office of Readings is special. In that prayer, we join with the rest of the Church in offering praise to God and the core of that praise is proclaiming the truth about the great unfolding of our salvation. Engaging this truth heals us – helping us to join the mind of Christ rather than the mind of some clique. And it changes the world by making this truth present where it was not before. As a result, it renders praise to God.

The Office of Readings consists of saying a number of psalms, the ancient prayers from the Old Testament, as well as two readings: one from the Scriptures and one from the tradition of the Church. Scripture and Tradition are God’s revelation – unmessed with. This is literally the real, divine revelation. These are the facts involved in accurate perception and are worth more than the time frittered away on a sitcom, or on lusting to belong to a particular social circle. 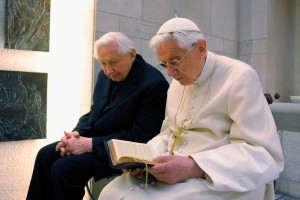 What is this revelation? According to Vatican II, the sacred tradition and Sacred Scripture “of both the Old and New Testaments are like a mirror in which the pilgrim Church on earth looks at God.” We look into this mirror when we start to read the Office of Readings regularly. We look at God – something much better than staring into our digital devices.

The Council was emphatic that “both sacred tradition and Sacred Scripture are to be accepted and venerated with the same sense of loyalty and reverence.” Our loyalty to the unity, the unity of the deposit of word of God, leads us into unity as a community.

In fact, there is only one deposit of the word of God involving both the complete Scriptures as well as the complete tradition of the Church. It is that community, out of all of the scattered fragmented communities each under the tyranny of its own perception, that holds to the one deposit of faith that is indeed the closest to the true Church.

It is such a community that makes people say, with St. Paul: “If there is any encouragement in Christ, any solace in love, any participation in the Spirit, any compassion and mercy, complete my joy by being of the same mind, with the same love, united in heart, thinking one thing.” (Philippians 2:2)

Many of us have come to believe that there’s something intrinsically wrong in thinking the same thing – which may be true when what we’re thinking is some currently fashionable nonsense. When it comes to thinking about the one true God who made and sustains all being, it’s no virtue to indulge in individualist fantasies.

We pray for unity at every mass, but could we do more than that? We could all read the artifacts from the one deposit of faith and come to be of one mind – forgetting our private imaginings and joining the mind of the Church.