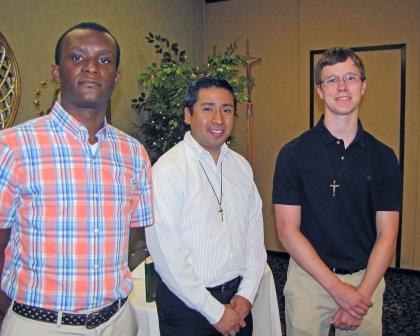 On Sunday July 26, three young men, two who are returning and one who is beginning studies at the Oblate Pre-novitiate in Buffalo, New York, were celebrated at a Missioning Ceremony at The Shrine of Our Lady of the Snows in Belleville, Illinois.

Lennard Panthier, 23, comes from the Caribbean Island of Dominica and will begin his first year as a Pre-novice. Lennard has already had two years of philosophy and has studied inter-cultural communication. He speaks English, French, and Creole.

Brian Bernhardt, 19, from Bloomington, Illinois is returning for a second year at the Bishop Fallon Residence in Buffalo. Brian describes his first year as a Pre-novice as, “Full of blessings and full of transitions.” Brian plans to spend three more years in Buffalo getting his Bachelor’s Degree before moving on to the Novitiate. 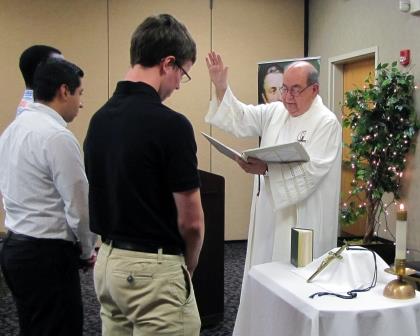 The other returning Pre-novice is Jerry Gutierrez, 32, a native of Patterson, NJ. Before coming to the Oblates, Jerry, who is fluent in English and Spanish took classes in Finance and nursing, and worked in retail and accounting. In his second year Jerry looks forward to, “…getting to know more about the Oblates and their charism, and getting to know more about the poor.” 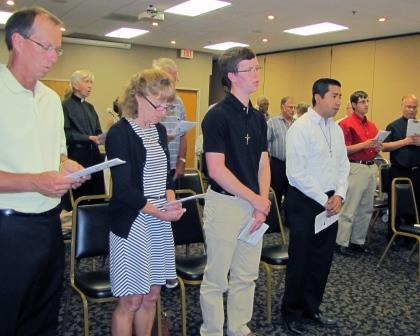 Among those gathered for the ceremony were friends, family, local Oblates and a large contingent of Oblate Associates. Fr. Tom Ovalle, OMI, Director of the Shrine gave the homily and prayed over the Pre-novices, assuring them of the blessing and prayers of all those present in the coming year.

In summing up the Missioning Ceremony, Midwest Vocation Director, Fr. Harold Fisher, OMI said, “It’s a kind of a sending off ceremony, where they get together with friends, family, and Oblates for prayer, fraternity and to enjoy a meal together.

After the ceremony everyone enjoyed a festive dinner prepared and served by the Shrine Restaurant. The three Pre-novices will be making their way back to Buffalo over the next two weeks.