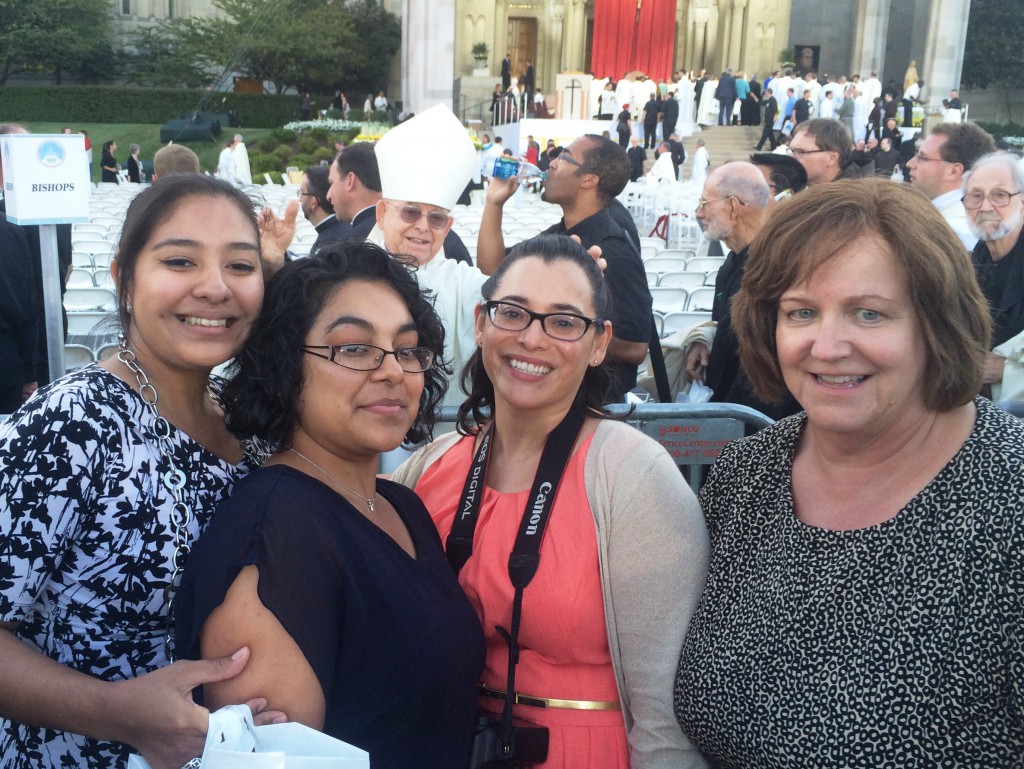 The nation was captivated by Pope Francis’ first visit to the U.S. from September 22nd – through the 27th.  With nearly wall-to-wall TV coverage we saw his historic speech to a joint session of congress and his presentation to world leaders at the U.N. We saw him go directly from the halls of congress to visit with and bless the clients and homeless who gather at lunchtime for the St. Maria Meals Program of the Catholic Charities for the Archdiocese of Washington. More than once we saw him stop his motorcade and its army of security in order to bless children and families he saw standing on the street among the vast crowds hoping to catch a glimpse of him.

But, among the throngs in Washington for the Papal visit were some especially lucky visitors made up of some Oblates, a class of Oblate novices, and from San Antonio, Victoria Barrientes-Luna, Office Manager for the Southwest Area Office and Vocation Office, Claudia Garcia, Gift Advisor at Oblate Missions, her sister, Yvette Ibarra, and former Oblate employee (in Belleville, IL.) and Oblate Associate, Geri Moore, who all got a much closer look at the Pontiff.

Knowing they would be staying at the Oblate residence, the group hoped to catch a glimpse of the Pope’s motorcade before the Canonization Mass for Junipero Serra at the Basilica of the National Shrine of the Immaculate Conception, which is just across the street from the Oblate Provincial House. But a few days before they were to leave San Antonio for Washington, they were surprised and delighted to receive tickets to attend the Mass! By arranging the tickets, Bishop Michael Pfeifer, OMI made sure this would be a memorable visit for the four women from San Antonio. 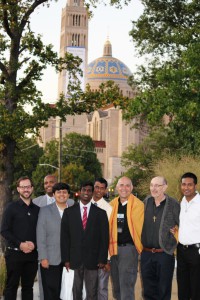 Victoria came prepared with a good camera and lens she borrowed from a friend and her photos accompany this article. While at the residence, the group from San Antonio got to mix with Oblates of the DC Community, Oblate formators, Fathers Tom Horan, and Jack Lau, who brought the Oblate Novices from Godfrey, Illinois for the event. The atmosphere at the Oblate house was “…like a family get-together…” according to Victoria. In anticipation of Wednesday’s Mass, they watched the Papal coverage on TV with other guests before making the short trek to the Basilica.

Security was tight according to Victoria, “somewhat heavier” than airport security checks, purses were thoroughly searched and everyone passed through metal detectors and other screening procedures. “We anticipated a long time going through security so we arrived about noon for the 4:15 outdoor Mass.” Getting through security took about an hour but Victoria described the security personnel and the crowd of some 25,000 ticket holders as, “…kind and respectful…When you have him (Pope Francis) as an example you tend to act that way.” 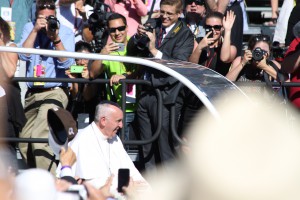 Prior to the Mass, many people sought shade from the bright sun while others shopped for religious articles or bottled water. At three O’clock, everyone was required to be seated and the anticipation began to build. As time grew near, “the bishops processed in which meant the Pope would be coming soon,” said Victoria. Next was the sound of the motorcade, and she was able to get a shot of Francis in his “Pope Mobile.”  (Photo on right)

Victoria said the Mass was a very emotional experience: “It just felt really joyful…his message is so genuine, he speaks and acts out of love and you can feel it when he’s so close.”Afterward, the Oblate house was filled with guests and more friends who came to visit and wait out the traffic jam of cars and people leaving the area. Everyone happily talked about the experience from the perspective of where they happened to be seated or standing during the Mass. Victoria described the atmosphere as “…like being with family…like the best Thanksgiving meal ever!”

It was back to San Antonio on Thursday after participating in this once-in-a-lifetime event. Victoria and friends expressed their gratitude to the Oblates for their hospitality and to Bishop Pfeifer for his efforts to acquire tickets to the Mass. Victoria said she went home, “Feeling blest to work for the Oblates and to have stayed at the  residence, I felt at home, it was like being with family.” 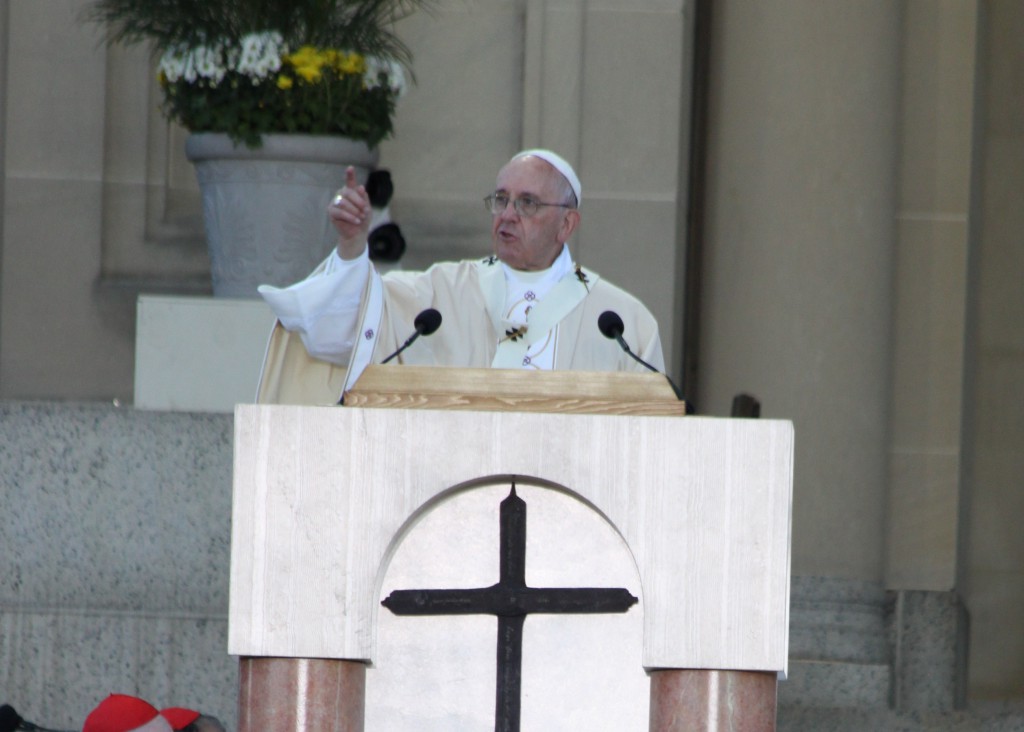 Oblate Fr. John Staak appears to be very excited about seeing the Pope

Fr. Louis Studer, OMI, one of several Oblates who concelebrated at the Mass is shown here with Province Personnel Assistant, Janice