One of the hot topics as the Synod on the Family occurs from  Oct. 4-25 is whether divorced and remarried Catholics can receive Holy Communion.  A closely related topic is whether Protestant members of a family can ever receive Communion with their Catholic spouses and children.  It comes down to the interpretation of “need.”

According to our current discipline, Protestants may receive the three sacraments of Anointing of the Sick, Reconciliation, and Communion if there is a serious need, if they ask for them, and if they believe substantially what Roman Catholics (and Eastern Orthodox) believe about these sacraments. And the Decree on Ecumenism of Vatican II in #8, notes that such sharing in these situations  is not only allowed, but commended. (For the background of how Catholics and Protestants are converging on our belief in the Mass/Lord’s Supper, see the Eucharistic Hospitality page on the Mission-Unity-Dialogue website www.harrywinter.org).

In the September 21 issue of the national Catholic weekly America (edited by the Jesuits), a Roman Catholic husband summed up his heartbreak very concisely:  Gregory Hillis, “One in Spirit, Life between Catholic and Episcopal churches,” pp. 31-32.  He described the progress from the Roman Catholic Church regarding inter-church families as simply a problem, to that of regarding them as also a gift, with sharing of the Eucharist in “exceptional circumstances.”  Since his wife is Episcopalian, he asks if their children can make First Communion and Confirmation in both traditions?

A remarkable network of support groups exists all over the world for inter-church families:  The Interchurch Families International Network (IFIN).  This group has submitted a paper to the Synod, and describes the section of the preliminary Synod document “Instrumentum Laboris,” which deals with the challenge: www.interchurchfamilies.org. 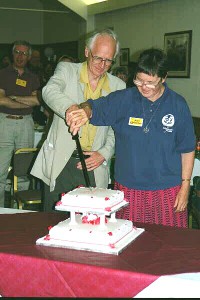 The late, Rev. Martin Reardon and Dr. Ruth Slade Reardon during a celebration

Personal disclosure:  one couple who played  a major role in the founding of the Association of Interchurch Families in England, one of the groups now belonging to IFIN, Rev. Martin Reardon (Anglican) and Dr. Ruth Slade Reardon (Roman Catholic) have been great friends of the Oblates of Mary Immaculate since Father Bill Reinhard, OMI and I (then a seminarian) attended the Summer Course for Theological Students at the Ecumenical Institute, Bossey, Switzerland, July 27-Aug. 16, 1964. They had just been married, and spent part of their honeymoon at Bossey, because Martin was chaplain for the Course. Martin  was the first General Secretary of Churches Together in England (1990-97) and Ruth served for many years as co-editor of the Catholic ecumenical review One in Christ.  They both stayed at our seminary in Washington, DC,  July 30-Aug. 1, l996. They raised their two children in both the Anglican and Roman Catholic Churches.  Martin died on Jan. 3, 2005. Ruth continues their ministry with IFIN. Her many and insightful articles are available through the IFIN website.

Do Eucharistic ministers, permanent deacons, and pastors know that more and more families are inter-church? Can we pray fervently that the Synod will produce a solution to their dilemma?

I have personally been approached by Protestant ministers whose wives and children are Roman Catholic.  They were allowed by the Catholic pastor to take Communion with their families at Saturday evening Masses, until  a parishioner complained that such was scandalous. The pastor then told the minister he was no longer welcome to receive Communion.

Yet both Pope John Paul II and Pope Benedict encouraged Brother Roger Schutz, the Reformed Protestant founder of the Taize Community, to receive Communion at Masses in St. Peter’s in Rome. Pope Francis has certainly indicated that compassion and mercy are the hallmarks of Catholicism. Can we approach our bishops and those attending the Synod, with our concern?