During my recent visit to South Africa for an event on mining that was hosted by the Anglican Archbishop of Cape Town, Thabo Makgoba, I had the opportunity to connect with three different Oblate communities in South Africa. These visits provided a great opportunity to connect with Oblates in frontline ministry and mission, to learn about their missionary priorities and challenges and to celebrate with some members in the local communities.

The first stop was to an initiative that is very fresh in Mitchell Plain on the outskirts of Cape Town and in the nearby township of Khayelitcha. I had a chance to visit the area where these four young Oblates are in mission and debrief with them on my reason for being in the area and about their work over a very tasty pizza. They also talked about their memories and relationships with Oblates in the US Province and specifically with Oblate Frs. Jim Datko, Bill Clarke, John Staak, Paul Waldie and Tom Singer. 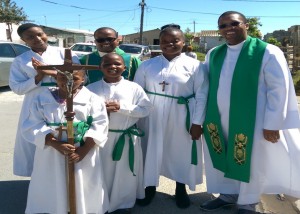 On Sunday, I had the opportunity to join in the celebration of the Eucharist in a township chapel. It was a very small corrugated iron construction building that was squeezed in between a number of domestic dwellings. There was one single file aisle available which made the different processions and collections that are usually part of the Catholic experience of Mass very interesting. That is saying nothing of the music, movement, and swaying that were part of the celebration.

In Johannesburg, I visited the well-known Soweto area and on the northern side of the city, the Alexandra township where Oblate have maintained a missionary presence for decades and the retreat center and novitiate at GermistonThe stories that form part of these missionary endeavors and the oblate characters who came from places like Lowell, MA and Inchicore in Ireland who were part of this long-standing missionary effort are legend here and their courage and creativity in the face of grinding political oppression and oppressive police and state force and ingrained and deep racism is inspiring.

Twenty years after the release of Nelson Mandela from prison and the initiation of the period of the new South Africa the wheels of development appear to have come off the bus. Unemployment over 25% is persistent with no clear path to address this debilitating experience for so many. The absence of a substantial opposition political party has allowed the ANC to dominate the space and thereby control most aspects of society. Political Corruption and graft are expected in every transaction and few institutions have the strength or the presence to respond strategically to these issues.

The country’s energy policy remains very dependent on coal mining and burning and this continues to contribute to very dramatic public health and social challenges that show now have not been addressed. This after a having made great strides in addressing an HIV-Aids epidemic that was made catastrophic by a misguided government policy. The forthcoming debate on developing both sovereign and global responses to the climate change issue puts South Africa at the center of a number of pivotal debates. 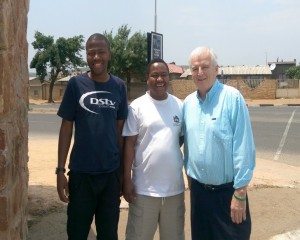 The effects of this very tragic and repressive period in the recent history of SA are present across society. They are more prevalent and obvious when you visit a township and see the grinding poverty and violence that is deeply rooted. To watch these young oblate missionaries in each of these townships continuing a religious and gospel presence, pastorally comforting the afflicted and aged and standing in solidarity against oppression and indifference was encouraging and hopeful.