Originally Published on The Catholic Thing

We have to admit these days that, in several areas, a superficial view of the Church is rather disconcerting. An archbishop at an international meeting does not seem to know the basic Catholic theology of conscience. Headlines announcing that for every person who joins the Church six leave. Parishes are closing. And surveys indicate that about 60 percent of Catholics are compromising themselves – and the Faith – by voting for pro-abortion parties.

But there’s a positive side to these problems. These and many more such negatives have been pushing many of the people that I encounter regularly to be concerned about the Church. And that is always good. But what interests me here is that they are beginning to question themselves and doubt their shallow understanding of the faith as well.

This is where the flaws in their education in the faith and perhaps how far the political model of the faith – if I can call it that – has seeped into their thinking. In the political model, I see the view that faith works like local politics. So instead of believing in what they find in the Scriptures, the Catechism, or the other documents of the Church, what politicized Christians believe gains weight in their thinking from things going on around them and from what other people think.

In the face of this widespread muddle, let us assert again that the Catholic faith has real content, the type of content that does not change. “Christ is yesterday, today, forever!” (Hebrews 13:8) This content can be found in the Scriptures and the documents of the Church. But let us also assert that the experience of the faith is grounded in the Body of Christ, the Church community filled with the Spirit of God.

This experience is not threatened by the errors of a bishop, or news reports about the Synod on the Family, or the near–apostate behavior of a clergyman or a politician, or the strange teachings of some “Catholic” colleges. This faith experience is only subject to the encounter with the Incarnate Word. And that encounter is certainly found in the celebration of the Eucharist and the other sacraments, in the official prayer of the Church, and its official teaching.

These are the doorways into the vast spiritual realm where the Incarnate Word rules. “All power in Heaven and on earth has been given to me.”(Mt 28:18) In this perspective, the silliness of human beings does not have much relevance except to spur us to understand our spiritual experiences far more deeply and to find their true roots. It is from that depth that occasionally, too, we are called upon to stand up and be counted.

In the spiritual realm, at Holy Communion, the priest asks that we be “filled with his Holy Spirit, [and to] become one body, one spirit in Christ.” He asks that we join the heavenly community and “Christ make of us an eternal offering to you. . . .With your blessed apostles and glorious martyrs, and with all the saints, on whose constant intercession in your presence we rely for unfailing help.” These words are from the Third Eucharistic Prayer. 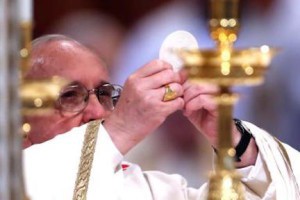 Pope Francis Attends Mass For The Possession Of The Chair Of The Bishop Of Rome In The Basilica Of Saint John Lateran on April 7, 2013 in Rome, Italy.

The priest is describing the glorious company in which we share, namely the company of those who have passedthrough the tests of this life and have kept the faith. Furthermore, they are constantly interceding for us as we participate more and more in union with Christ and his Church right here on earth.

These are only a few of the aspects of the Church that come from God. In the words of the theologian Henri de Lubac – a thinker deeply admired by St. John Paul II: “in this sense, [The Church] is entirely holy and unfailing. Her doctrine remains perpetually pure and the spring of her sacraments perpetually fresh.” As we know so well, there is also the earthly dimension of the Church where as de Lubac says: “in this world the Church is a mixed community and will stay like that to the very end – unthreshed corn, the ark with both clean and unclean animals, a ship full of unruly passengers who always seem to be on the point of wrecking it.”

We stand with a foot in each of those two sides of the Church. Our own sinfulness and the sinfulness of others get in the way, but this is the hand that we all, since the Fall, are dealt. However, so beautifully has the Lord dealt with us that we can do more than merely survive in this environment. We can actually thrive.

The reason that we can thrive is that we grow as adult Catholics in God’s truth and grace. We are “under grace.”(Rom 6:14) We have become “obedient from the heart to the pattern of teaching to which [we] were entrusted.”(Rom 6:17)

In this culture, there is a lot of the adolescent around us, and perhaps even inside of us. There is the know-it-all attitude, the invincibility, the Pelagianism, the ignorance of consequences, the catastrophic thinking, the if-it-feels-good-do-it attitude. Many beyond chronological adolescence believe that such a life is what it means to thrive.

But as we become more adult in our faith, we can do the things that real grownups do. We can become obedient to the truth; we can become less self-serving and more other centered. That is real thriving. And even in the worst of times, it’s the kind of thriving that Christ and Church have made possible for us.