Fr. Richard Hall, O.M.I. joined the Archdiocese and other Religious Orders at San Fernando Cathedral in San Antonio, to inaugurate National Vocation Awareness Week.  Fr. Richard, along with Scholastic brothers, Dan Ziegler, O.M.I., Antonio Zapata, O.M.I. and Victor Silva, O.M.I. celebrated this event by participating at the Sunday masses and then handing out Vocation Prayer Cards, and other pamphlets about the Oblates, to the people.  A note of interest: After one of the masses, a young man approached me to know more about the Oblates and who is discerning a call. He’s from Philadelphia and just happened to be there at the Cathedral for mass.  Long story short, he ended up joining the Oblate brothers at Sexton House for prayer and a meal.  Sometimes all it takes is a conversation.

The San Antonio Archdiocese is a great collaborator with the Religious Orders when it comes to Vocations.  For example, once a month all the Vocation Directors gather with the Archdiocesan Vocation Directors, to talk about strategies and other events that we can participate in together to promote vocations.  We are thankful for the Archdiocese in their efforts to work together in promoting vocations to the priesthood and religious life. 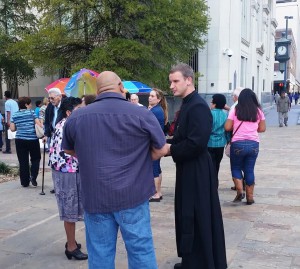 Bro. Daniel Ziegler, OMI chats with a potential vocation in front of the Cathedral 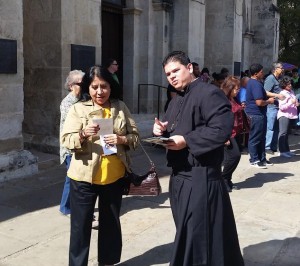 Bro. Antonio Zapata, OMI visiting with a parishioner after Mass.