On September 26, 2015, we came to the end of the pilgrimage of the statue of the Virgin of Fatima in the diocese of Kamyanets-Podilskyi. (The Auxiliary there is Oblate Bishop Radoslaw ZMITROWICZ). For the Oblates, it was a very important event. The preparation took six months: conversations with the bishop; agreements with the “Lights of the East” Association; preparing the plans for the pilgrimage; preparation of prayer books, posters and various materials in the Ukrainian language. The program began on May 1 at the Shrine of the Mother of God at Leychiv.

For five uninterrupted months, the Pilgrim Virgin of Fatima visited 82 parishes that have a permanent priest (with 3 days of retreat in each parish) and 71 mission station parishes, that is 153 parishes in all, comprising 6,655 km. Our old minibus (that’s all we have) broke down 8 times. However, there were always kind people ready to help us and therefore, we were able to arrive everywhere on time. Thanks to the help of the “Lights of the East” Association and their benefactors, during the pilgrimage, 14,000 rosaries were distributed, as well as 12,000 books in Ukrainian and Russian on St. Eugene de Mazenod, 11,000 images of Mary and 9,000 Miraculous Medals.

But these numbers are not the most important thing. Most important are the testimonies of conversions of many persons and the prayer in common for peace in Ukraine for which we Oblates have made a considerable contribution. (Fr. Pavlo VYSHKOVSKYI, Delegation superior)

Here are excerpts from the testimonies of a couple Oblates who took part in the pilgrimage:

Fr. Sergiej PANCZENKO: This time was an occasion for reassuring us of the actuality of the Fatima revelations. Especially for our land where until now there is still a post-Soviet spirit and where in many cities and towns, there is still a Lenin Street.Every day when I shared the message of Mary with other people, then I began to be more conscious of it and to live it more. Then one can better notice how people receive it in the depth of their hearts, how they begin to live the First Saturday of the month, how they grasp their rosaries. During this pilgrimage, I saw in the people great devotion to the Mother of God. Our people love Mary. The pilgrimage was also a time when many people went to confession; perhaps this struck me more than anything else. 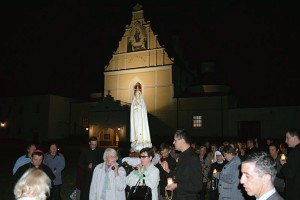 Fr. Andrzej MACKÓW: In July, several times two women came to pray, one older and the other younger, always with a bouquet of roses. They were a mother and daughter of the Orthodox communion.In May, they had visited one of the parishes and prayed for the health of the daughter. Not only was the daughter healed but they received many other favors from the Mother of God, for themselves and for their family members. Thankful for the graces received, that mother and daughter came to follow the Mother of God wherever they could. In some parishes, Orthodox priests participated, whether from the Patriarchate of Kiev or of Moscow, I do not know. They came with their faithful. In one of the parishes, an Orthodox priest came, accompanied by his wife and children; they participated in the vigil for families and the whole family came for a blessing.