About thirty-five years ago, Oblates from Poland established a mission on the large island of Madagascar, in the diocese of Tamatave. They immediately began to think of the future, being faithful to a challenge from the Superior General, Fr. Marcello ZAGO, who told them: “If we have started some undertaking, we must know how to continue it”. Encouraged by this, the Oblates of Madagascar by 1988 began to open houses of formation. This has been so successful that according to the latest OMI Personnel, there are now 40 Oblate priests, 5 Brothers and 25 scholastics in the delegation. 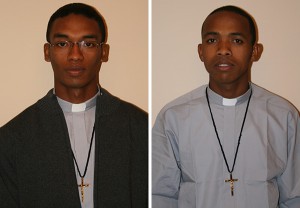 While they have well-established houses of formation in Madagascar itself, wishing to teach the candidates that the Congregation is international, for many years they have also sent seminarians and Fathers to study in other countries, especially in Africa and in Rome. Three Malagasy students are currently pursuing their theological studies at the Oblate Scholasticate in Cameroon; one in Rome.

On October 14. 2015, for the first time, two scholastics arrived in Poland, and after one year of a Polish language course in Poznan, they will continue their theology studies at the Oblate Scholasticate in Obra.

Hippolyta RANDRIAMTSALAMA and Andry HERINIRINA have begun their Polish studies. Both of these young Oblates professed their first vows in 2012 and completed their philosophical studies at the Archdiocesan Seminary in Fianarantsoa in 2015.