Michael Paul Rodrigo was born on June 30, 1927 in Sri Lanka into an upper class family.  His father came from a Buddhist family and his Mother was Catholic. At this time in history one can only imagine that this interfaith marriage must have caused some conversation if not some struggles within the family, church and society. Yet at the same time, we see the seeds of his life in inter-faith dialogue and as a builder of peace. 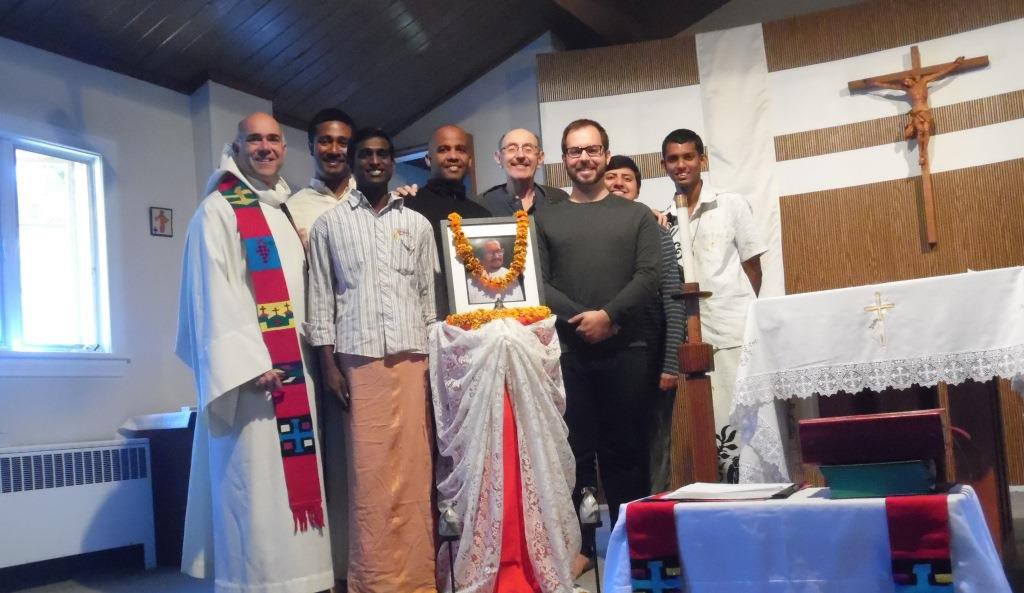 Mike did his early studies at St. Peter’s College in Colombo and then entered the novitiate 1947-48 where, after his first vows, he was sent to Rome to Study at the Gregorian. While in Rome he also received his first Doctorate in Theology with his dissertation titled:  The Enlightenment of the Buddha (1959). Later on he was to receive his second Doctorate from Institute Catholique de Paris in Comparative Religion. His second dissertation was titled: The Moral Passover from Self to Selflessness in Christianity and the Living Faiths of Asia  (1973).

After coming back from Rome in 1955, he joined the staff of the new National Seminary in Kandy where Fr. Fred Sacket, OMI was rector for nine years (three terms). Fred was from the U.S.A and throughout his long history he was instrumental in the lives of many Oblates. After coming back from Paris with his second doctorate, Mike joined with the Oblate scholar and visionary, Tisa Balasuriya, OMI at the Centre for Society and Religion. In 1975, Bishop Leo Nanayakara, OSB of the newly formed Diocese of Bandulla asked Mike if he would oversee the new seminary. This was not to be the traditional seminary behind high walls or expansive properties, but one in which the seminarians would live in the same manner of the poor of the neighborhood. In fact all the bishops of Sri Lanka seriously questioned the new endeavor. But it was from there that the seminarians would find their philosophical and theological roots.

After five years of overseeing the seminary, living the life of the people and reflecting upon the Gospel message, Mike was called to “seek out a new way for the Word of God to reach the hearts (of the people which), often calls for daring” (Oblate Const. 8). Moving into a small mud hut in the village of Alukalavita, in order to be in solidarity with the poor and impoverished, Mike reflected Rule 9a: “Responding to the call of the Spirit, some Oblates identify themselves with the poor, sharing their life and commitment to justice.” This small village was once prosperous with their countless rice paddies, yet with British colonization those paddy fields were burned and dried up with the promise of money and wealth from sugar cane. Not only did the people never see any monetary gains, but their social structure was shattered. Generations of agricultural knowledge and celebrations were erased, and the spirit of the people was subjugated / dominated by the wealthy corporate landholders.

When Mike first arrived in this small Buddhist village, the people and the local monks were suspicious of this Catholic Missionary. They had seen it before; villages would be incited by the Western Style of life and the promise of foreign donations and then, “He would pour water over your heads and convert you to Christianity.” The community and the monks soon realized  that Mike was different. And there is a story about when one of the monks had to be away from the temple, he asked Mike to lead the Saturday instruction; “…well, you are the one best suited to undertake that task.” His teaching on the “Value of Religion” was so well received by the people that he was asked to teach every first Saturday. The villagers remained good Buddhists and had great respect for the Christianity that Mike lived by in his life.

Yet this did not bring him friends with the powerful land owners or some in the hierarchy of the church. Inter-culturation, inter-faith dialogue, and educating the people about their rights, and  how to avoid being exploited by the both government and business, brought forth enemies to Mike and the community of both Christian and Buddhist who were of like mind and heart. Yet, Mike remained focused on the principles of Ahimsa (non violence) and love. Love of one’s enemies as Jesus taught was what would weaken the enemy, for “Love increases our appetite for life. Love enhances zest for life. Love purifies our intentions. Love encourages us to go beyond ourselves and commit more and more for the others.” – (Anton Meemana a professor who taught with Mike) 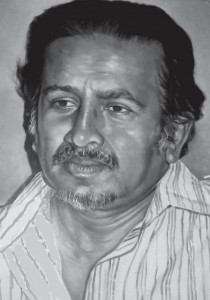 Tensions grew in the little village of Alukalavita, for the people grew united and grew in understanding of the systems that were oppressing them. Some were telling Mike and the small community/ashram around him to leave for their own safety. And so at mass on the 10th of November, the small community gathered to share Eucharist and discern if they would stay or leave. They communed in the Body and Blood of Christ and then, on a small piece of paper they marked, yes, that they would stay, or no they would leave. Michael’s last words were; “After all, the lasting things are love and relationship with people. These things will last even in eternity. Don’t be afraid, we will commit ourselves to God. He added, “Into your hands O Lord I commit my spirit”. It was nearly 7:30 in the evening, when the sound of a gunshot at close range reverberated in the room. Fr. Michael’s skull and brain lay shattered on the floor. His flesh was laid impasto on the walls of the room and his blood splashed on the vessels used for the celebration of the Eucharist. “His Passover from a purposeful life to an avoidable death was accomplished.” – (Eymard de Silva Wijeyeratne, The Guardian)

At the 25th Anniversary of our brother’s Martyrdom, Bishop Norbert Andradi, OMI, posed some questions and said, “We have to go beyond a mere commemoration of Fr. Mike. As Oblates we have to question ourselves as to the next step. Celebrating and rejoicing alone won’t do. How should we as disciples of Jesus Christ live profoundly Fr. Mike’s discipleship? He discovered those things that were opposed to God’s plan. He had to let go of many things in order to achieve his goal. He knew that the Oblate Cross should not be a mere ornament. His convictions ought to challenge us. He was not just a social worker. He had a profound spirituality centered on the mystery of the Eucharist.”

In appreciation for the insights and help of Philip Singarayar, OMI

St. Eugene Prayer, based on the oblation prayer of Fr. Mike Rodrigo

I give you my hands to do your work,

I give you my feet to go your way,

I give you my eyes to see as you do,

I give you my tongue to speak your words,

I give you my spirit that you may pray in me.

Above all, I give you my heart

so that in me you may love your Father and all humanity.

I give you my whole self that you may grow in me,

So that it is you, Lord Jesus, who lives and works and

prays in me. AMEN

http://www.asianews.it/news-en/Fr.-Mike,-prophet-and-martyr-of-the-modern-Sri-Lanka-25284.html     written on the anniversary of ordination

http://www.asianews.it/news-en/Fr-Mike%E2%80%99s-love-and-nonviolence-among-Sri-Lankan-Buddhists-23144.html      written on the 24th anniversary of Death