Every spring, as monarch butterflies begin their long journey from Mexico to Canada, they are followed by tens of thousands of human migrants. They come, summer after summer, to harvest fruits, berries and vegetables, low paid work for which few Canadians are interested in applying. The migrants, mostly Mexican men, are part of the Season Agricultural Worker Program (SAWP). Their labour and low wages help keep Canadian agri-business competitive and Canadian produce relatively cheap.

One of these men is Antonio. Antonio had been coming to Canada every year for over 20 years, usually arriving in April and returning home in December – the maximum stay allowed under the program. He leaves behind his wife and family – only those who have wives and children are allowed into the program. Although Antonio spends most of his life in Canada, he will never be allowed to become a permanent resident or to bring his family.

Life in Canada is lonely and the work difficult. But Antonio hopes that, after paying his expenses in Mexico and Canada, he can put aside enough cash to pay for the education of his children. Others are saving to buy a little house or a small business – all depending on the quality of the harvest and the number of hours they are able to work. Over the years Antonio has learned a little English, but there is little opportunity to practice. Antonio and his co-workers live in a kind of barracks, 50 km from the nearest major town. The program does not provide for language classes; the work days are long and Antonio has little opportunity to interact with people other than his co-workers and bosses. The workers remain eternal strangers in the country where they spend so much of their lives. At the same time, those who stay in Canada for the full term of 8 months per annum become strangers to their families back home. Antonio has missed the birth of his children, their birthdays, their graduations and the funerals of his parents.

Oblates in British Colombia (Otto ROLLHEISER) and in Manitoba (Thomas NOVAK) have been part of ministries that befriend and support workers like Antonio. As a student at St. Paul University in the 1980’s, Thomas studied the liberating leadership of Cesar Chavez, founder of the United Farm Workers. Chavez led many successful actions to improve the working conditions of Mexican and Mexican American workers who harvest the fruit and vegetables of California and Texas. Today Thomas coordinates a volunteer ministry to another generation of Mexican farm workers; it is based out of Winnipeg’s St. Ignatius Hispanic Catholic Community. 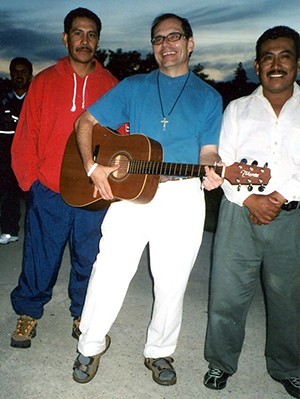 Thomas Novak with his guitar and members of the choir of SAWP workers.

During the harvesting season, Thomas organizes monthly celebrations of the Eucharist in Spanish for Mexican workers in Portage la Prairie and in the village of St. Eustache. The goal of the ministry is not just to provide religious services but to address the isolation of the men, to help them make some contact with the community and to give them a sense that they are cared for and that they are valued for more than for their labour. Thomas and other volunteers visit with the workers on Friday evenings when they are driven into town to do some shopping and their banking. The volunteers try to address any problems that the workers bring to their attention. Every year the ministry organizes special celebrations around Mexican Independence Day (September 15). The celebrations include a supper prepared by the parishes in Portage and St. Eustache and soccer matches between teams from the larger farms.

In 2009, Thomas co-founded the Migrant Workers Solidarity Network (MWSN). The MWSN is a more political coalition that educates Manitobans about the realities lived by migrant SAWP workers like Antonio. Its members also campaign for better working conditions for the workers. They have successfully lobbied Manitoba’s NDP government to assure that SAWP workers are covered by the provincial medical health plan. In 2015, MWSN volunteers began organizing language classes at two of the farms.

There remains much to do. Although SAWP workers pay the same taxes as Canadian residents, they receive few of the benefits received by other workers. They pay into the national Employment Insurance plan, but cannot collect benefits. Most provinces still deny them participation in provincial Medicare plans. In 2013 the Harper Government stripped SAWP workers of the possibility of applying for the child tax benefit. Workers in most provinces are subject to abuse by recruiters and may be removed from the SAWP program if they are suspected of communicating with a union organizer or otherwise stand up for their rights.

If you would ask Antonio what would be the change he longs for most, he (and many of his co-workers) would say that it would be the opportunity to bring his family here and to make Canada his permanent home. The MWSN is linking up with like-minded coalitions across the country to encourage the new federal government to provide a pathway to permanent residency for all temporary workers. The rallying cry is “Good enough to work here, good enough to live here”.

The volunteer work that Thomas does among migrant workers is another way that Oblate priests, brothers and associates of OMI Lacombe Canada seek to be present to those who have been pushed toward the margins and, like St. Eugene, to help them to appreciate their dignity as beloved children of the Creator. (http://www.omilacombe.ca/)