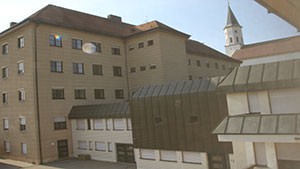 GERMANY: As of January 2016, about a hundred refugees from different countries, men, women, children, families, will be living at the house of the Oggelsbeuren Foundation. Since May of 2014, this building has been at the disposition of about 80 refugees. The Foundation is directed by the Foundation Council and the Board of Trustees. An Oblate, Fr. Alfred TÖNNIS, is part of the Foundation’s Board of Trustees.

Beginning on January 1, 2016, two Oblates (Frs. Heinrich MAYER and Alfred TÖNNIS) will live in the main house. A private chapel and various apartments make up the community space and are available for those who would like to visit and temporarily share their life.

This project was preceded by a two-year process, developing its own concept in the sense of “giving a home” to refugees. A steering group of competent persons was formed. There were visits to refugee camps in Malta, Greece and Lebanon. The people and leaders of the small village of Oggelsbeuren (450 people) were part of the process. The media were encouraging. 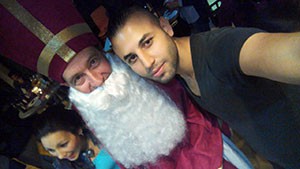 The idea of fleeing is a very current issue, not only in terms of the many refugees who are on the road. In our society, we are living various kinds of escape: escape into alcohol, drugs, sex. Escape into the “reality” ofthe Internet (there one can custom build embellished or even invented profiles — then live with them for quite some time). There is the escape of the body (plastic surgery, excessive sports, mental disorders as a result of no longer being able to tolerate one’s own body). There is the escape into relationships; escape to the monastery; escape into religious fanaticism; escape into violence. There is also “tax evasion”, another form of escape. Escape from responsibility. Escaping, fleeing: it is the issue of our time.

Also very current is the theme of the home, of being at home. Where am I at home? What do I mean by “home?” Is it about persons? Is it about buildings and places? Is it about ways of thinking or philosophical structures? Is it religion? Is it a culture? Is it a relationship with God? The lack of a home is also a theme for our time. 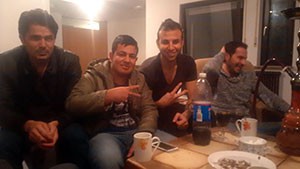 The ideas of escape/flight and feeling at home are also great biblical themes. There is the escape of persons from God’s command (Jonas); the flight of the Holy Family; the escape of entire peoples. We also encounter “economic refugees” and “refugees” in terms of violence and natural disasters.

We want these fleeing people to feel a bit at home, through our work, through prayer, worship and interreligious celebrations, through our witness of the Christian Good News and of our Rule and of the spirit of our religious community. Two prenovices of our Central European province have already lived with us for a while and have learned of our work.

There are Oblates who work with refugees in various countries: one could surely mention Italy and Spain. They have supported and even developed projects of their own. In many places, this work with people in 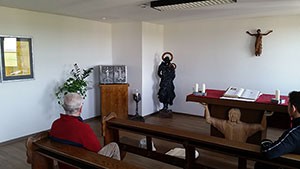 flight is increasing. For me, it would be important to work in a network. We could cooperate better on the international level. Perhaps it would be good not only to develop the “work with refugees in the whole Oblate world” with conferences and presentation of projects, with tools and its own website, but also, through our very work and a process to develop new missionary energies. Here, we have experienced that with this work, we also reach people who have been distanced from the Church or people who are religiously neutral. Here too a missionary field is opening up. We are experiencing that something new is emerging and a very good interreligious dialogue is beginning.

For me, the refugees are messengers of God. They pull us out of the fences around us, out of our structures, our oasis of well-being and our borders. They broaden our view. They transcend borders and challenge us. They oblige us not to define the works of mercy and a revitalization of our missionary spirit, but to live it.

Especially in view of our 200th Anniversary Year, we could deal with this challenge of God more intensely – in our work, in the spiritual and family life of a religious family found in the whole world: finally, our Pope Francis requires us specifically to receive refugees into our religious houses. (Alfred Tönnis)