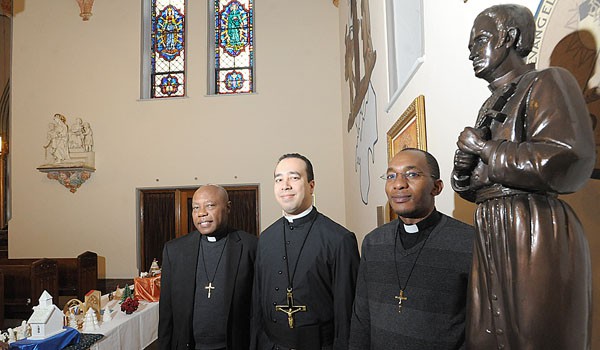 Bishop Richard J. Malone will celebrate Mass on Sunday, Jan. 24, at Holy Angels Parish in Buffalo in honor of the 200th anniversary of the Oblates of Mary Immaculate. Oblates also staff the West Side of Buffalo parishes of Holy Cross and Our Lady of Hope.

In addition to the Mass, there will be performances by the cluster choir, consisting of choirs of all three parishes, including an African choir, youth choir and Burmese choir. The Mass which will celebrate contributions of the Oblates, will be followed by a reception at nearby D’Youville College in Buffalo.

Father David Muñoz, OMI, parochial vicar of the parishes and chairman of the organizing committee for the Mass, said he felt the celebration serves as “a great moment to realize how alive we are.”

“We’re coming to the close of the Year of Consecrated Life, and the beginning of the Year of Mercy,” Father Muñoz said. “It all just fits perfectly together. The Oblates have always been known as missionaries of mercy around the world, and so I think it’s just that moment to celebrate that we’re still alive in the midst of so many things. It can seem a little hopeless that vocations go down, but we’re still going strong after 200 years.”