Originally Published in The Catholic Thing

In the modern high-pressure world, part of the act of faith involves avoiding secular intrusions into our daily life of faith. We should learn this kind of resistance for many reasons: because the meaning of words, events, and cultural markers should be coming from what we place our faith in and not from secular events.

Let’s take something simple, such as when do I depart from the celebration of the Mass? If I am genuinely participating in the Mass, then I would only leave after I had joined in the recessional hymn. Then, after a short thanksgiving, I could leave knowing that I had completely and reverently participated in the high point of my week.

If, on the other hand, getting out of the parking lot or getting to the supermarket have a higher priority than my faith, then of course I would be hustling to get out earlier and miss out praying and singing with the community. And I might gain – if that is even the right word – a few minutes. Of course, just to notice this fact should lead us to ask: a few minutes of what?

The intrusion of the secular can look innocent, so very innocent, but in fact it may be depriving me of something that is irretrievable, once it passes.

Just a little reflection poses the question for us: when we do something, are we valuing it according to our faith or according to what the world around us tells us is the value of that thing? And conscientiously pursued, this carries us into a realm with literally endless aspects.

Look at a Catholic Marriage. If a man and a woman were to commit themselves to checking everything that they do, individually and as a couple, against the benchmarks of the faith, I can say with certainty that they would discover a depth to their marriage and to the role of their marriage in the local church (and even in the secular community) that would absolutely surprise them. 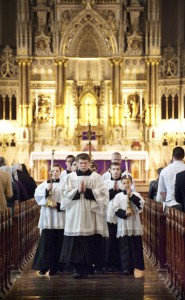 A good place to start would be Vatican II’s Constitution on the Church in the Modern World, particularly Chapter 1 in Part Two, the chapter on marriage. People who feel that they have their marriage under control or perhaps even feel that their marriage is getting “boring“ would find inestimable treasures in seeking to absorb and live out the lessons the Church teaches there.

The secret is recognizing the importance of working outwards from the truths of the faith, rather than working from ideas and practices presented by the culture. The latter, we know quite well, may sometimes be helpful, but more often these days carry a significance that runs directly contrary to the Christian life. In a time like ours, we’re blind if we don’t recognize this in the world around us – and that means what is presented by our neighbors, the people we meet in the supermarket, even in ideas of what “fun” is supposed to be.

John Paul II had to explain to people who play and watch sports that “the importance of sports today invites those who participate in them to take this opportunity for an examination of conscience. It is important to identify and promote the many positive aspects of sport, but it is only right also to recognize the various transgressions to which it can succumb.” He went out of his way to talk about this – a large part of many people’s lives today – in an address he gave as part of the celebrations for the 2000 Jubilee Year. So even relatively neutral “fun” involves one’s conscience. In a Catholic perspective, which means you are working towards authentic humanity, fun takes on a whole new meaning.

Pope Francis has offered at least three lessons that have gone largely unappreciated and unlearned. He does not live in a palace, counter to the ages-long practice of the higher clergy; he wrote on the environment, putting the Christian heart back into concern for Creation (which had become a virtual secular religion for many); and he called the Holy Year of Mercy, wisely choosing the virtue hardest to fake in the modern world. “Love” has already had its meaning largely washed out by secular behavior – and as a result can mean almost anything anyone imagines.

Examples are easy to multiply, but the central point is simple: unless we are living a reflective life of faith, we will simply end up living a life dictated by the secular culture and having little or nothing to do with the presence of Christ in the world.