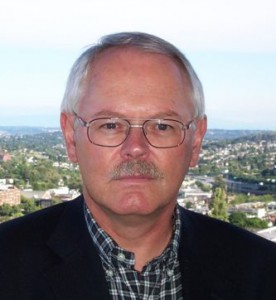 This summer, on a couple of occasions, a particular skepticism of mine was assaulted.

You see, I am one of those people whose faith allows for God to do big, earth-shaking, historically-significant, miracles—the Red Sea and the resurrection of Jesus—but expect that, save for these interventions every 10,000 years or so, God leaves everyday life pretty much alone.

So it was with considerable skepticism that I sat in chapel one day and heard one of our most respected Oblate missionaries share the following story:

Some 25 years ago, he had been in charge of two northern missions which were a considerable distance apart. In winter he made the trip between them by dog-sled. Since the trip was too long to make in one day, he had built for himself a rough shack half-way in between them, on each trip, he would spend one night.

Each spring, after the snow had melted, he would have to go back there and take out all the things inside of the shack (stove, bedding, cooking utensils and so on) so that these would not get stolen during the summer months. Once spring day, he returned to the shack to collect these things for the summer.

He came on horseback, stayed overnight, and in the morning packed all the things on to a sled-like contraption that he hooked behind the horse. He then set off for the day-long journey home and, because the horse was already pulling a huge load, he was on foot.

The day was unusually hot and, despite drinking water regularly, he slowly began to feel dehydrated. He reached the main road at 9 p.m. exhausted. Luck was on his side and, just after reaching that road, a truck chanced to come by and its driver volunteered to take all of his supplies to town for him.

With his horse now free of its load, the priest was able again to climb on its back and rest from his marathon walk. However he was still two hours from home, on horseback now, but dehydrated and exhausted.

Riding along in this state, he slowly became obsessed with the craving for an orange, a cold orange. Over and over in his mind, there was the image of himself sinking his teeth into a cool succulent orange. He said a little prayer to God, half wishing to find an orange.

A short time later he looked down the road, this abandoned dirt road in the middle of nowhere and saw an orange gleaming in the moonlight. He was so sure that it was an illusion that he continued riding right along. Then, more to check his sanity than in the hope of finding an orange, he turned back and got off the horse.

Incredible! There was an orange, cool, whole, delicious, just as he had fantasized. He peeled it and ate it. A mile later, another orange appeared; and a mile after that, still another one. A mile apart from each other, “God gave” him four oranges that night . . . at least that is how he interprets it!

I believe this story because I trust the sanity and sanctity of the man who told it; even though I am not much for believing in oranges inexplicably appearing at night on abandoned roads!

Less than a month later, I was visiting one of our retired priests who lives by himself in a small city near the West Coast. He is a man of extraordinary simplicity and deep prayer.

I spent some hours sitting with him in his apartment, listening to him describe how he goes up into the hills every morning to watch the sunrise because as he puts it, “in the refraction of light, I see God.” He invited me to go out for supper with him and as we were walking towards the restaurant my eyes chanced to see a penny on the sidewalk.

I bent to pick it up, saying: “This is one of my superstitions. If I find a penny, I think I will be lucky that day!”

“It’s not a superstition,” he told me. “God is blessing you. I know it because before we get to the restaurant you will find another penny. When God blesses us we find two pennies.”

The agnostic part of me was still dealing with his “seeing God in the refraction of light” when he gave me this assurance that God blesses us by giving us not one but two pennies. Really? Yes, it happened! Just as we got to the door of the restaurant, I looked down and there was a second penny! Who am I to doubt!

Coincidence? Piety gone over the edge? Have I been working too hard lately? Does God drop oranges on roads and pennies on sidewalks?

Somebody once said that the only difference between a mystic and a psychotic is that the mystic is more careful about whom he or she talks to.

As clever as that sounds, it’s wrong. The difference has nothing to do with whom he or she talks to, but with the fact that God is real, that the world of the supernatural actually exists, and that God’s providence includes everyday miracles, oranges and pennies.