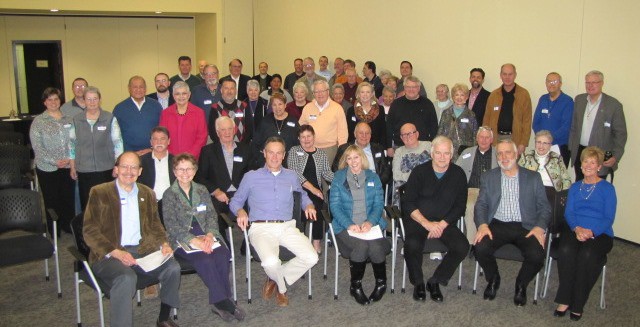 The Missionary Oblate Partners gather for a photo at the Oblate Retreat Center in San Antonio, Texas

The 6th Annual De Mazenod Conference, sponsored by the Missionary Oblate Partnership, was held at the Oblate Renewal Center in San Antonio, January 22-24, 2016.

The topic for weekend conference was “ARE WE READY? The implications of Pope Francis and Laudato Si.”  Attended each year by members of the Partnership, Oblates from the US and around the world, OST faculty and staff, and foundations and other Catholic institutions, the De Mazenod Conference is designed to offer dedicated reflection and discussion around issues affecting individual Catholics and the Church.

ARE WE READY?  speakers included former Colorado Governor Bill Ritter, who served as an advisor to the Vatican on Laudato Si, Sr. Maxine Pohlman, SSND, a director with the US Oblate Ecological Initiative, and Seamus Finn, OMI, who serves as chairman of the Interfaith Center for Corporate Responsibility.  Together they guided the group of nearly 60 conferees in sessions that included review of Francis’ remarks on key topics of the Encyclical:  humanity’s integral identity, our stewardship of the earth and its resources, and the nexus of money/investments and Catholic social teaching.

The Conference’s Saturday liturgy included two special moments:  a homily by San Antonio Archbishop Gustavo Garcia-Siller and presentation of the Partnership’s Joseph Gerard Award to John and Gee Gee Whitehurst, Partners who live in San Antonio.  The Gerard Award presentation included remarks on Gerard himself by US Oblate Provincial Bill Antone, OMI and also by Clyde Rausch, OMI, who created the Joseph Gerard icon that accompanies the Award.

The 2017 De Mazenod Conference will be held again at the Oblate Renewal Center in late January.