EDITOR’S NOTE: Visitors to the Oblate Novitiate and La Vista Ecological Learning Center, located outside Godfrey, Illinois on the bluffs overlooking the Mississippi River often ask about its history. Local Architect, John C. Guenther, tells the story in this article and photos forwarded to us by Fr. Jack Lau, OMI.

Perched high atop the bluffs of the Mississippi River north of Alton, Illinois is a remarkable little structure. Referred to as “the Tea House” by locals and “the Lodge” by its architect, this English Village design seems both at home and yet daring on its site. 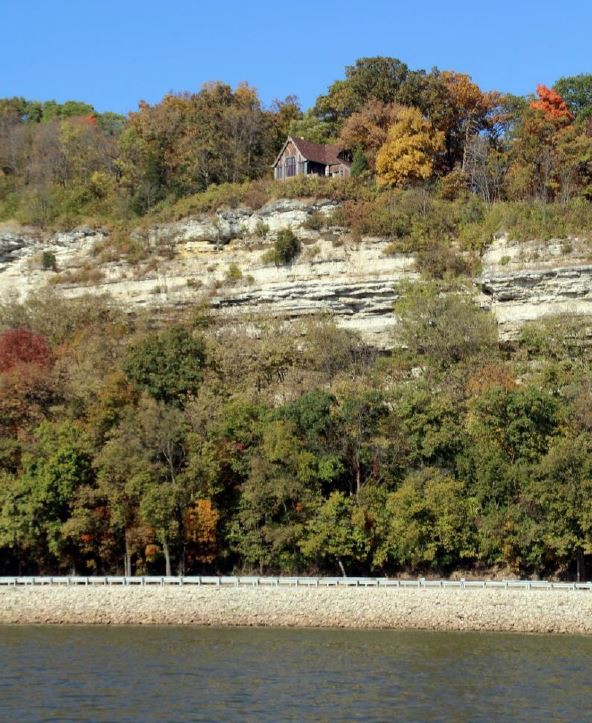 The Lodge as seen from the river. Photo by John C. Guenther

For years, my wife and I had admired this charming building while sailing by on the river below. (It is possible, but quite difficult, to see from the Great River Road). As an architect who has designed and planned various buildings since 1995 on the campus of Principia College just upriver near Elsah, I could not help but compare the architectural design, materials, colors and textures of this bluff-top pavilion with that of Bernard Maybeck’s architecture for the College. Indeed, if one were to relocate this pavilion to Principia College, it would fit in seamlessly.

Who was the architect for this little structure? Could Maybeck have dashed off a sketch while here in the 1930s? Perhaps a visit would reveal some of Maybeck’s design trademarks within. That opportunity finally came on Saturday, October 5, 2013, when Father Tom Horan, O.M.I. graciously gave us a tour and brief history of the place. 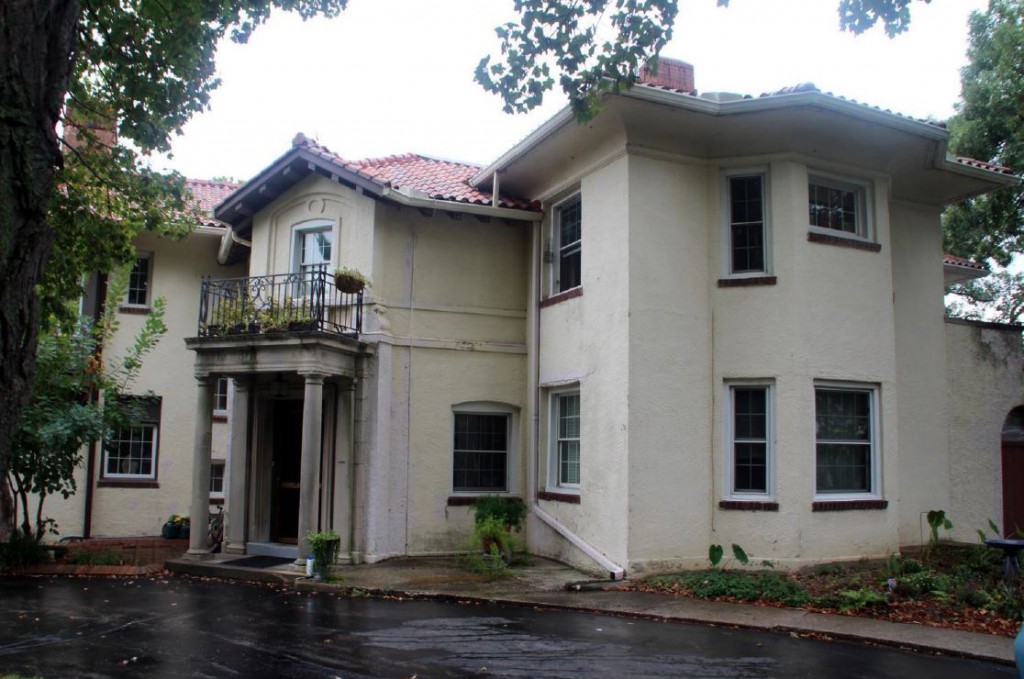 Now a Novitiate for the Missionary Oblates of Mary Immaculate, a Catholic religious order, the 200 acres and its main house and the Lodge were originally owned by the Levis family, who were owners of the Illinois Glass Company. We learned that the main house was a summer home built in the 1920’s. The site was selected for the prevailing summer breezes at a time when there was no air conditioning.

The Lodge is located on the bluffs just to the east of the main residence. While the lore is that it was a structure from England, purchased, moved and rebuilt on its current site as a playhouse (or the Tea House as it is referred to by locals) for the family’s daughter, it appears that the Lodge is actually a new structure inspired by English architecture and dates to 1934, confirmed by an article in the Alton Evening Telegraph of 1934.[1] A copper lightening proof tag affixed to the building (dated 1934 by the St. Louis Lightening Protection Co.) gives further confirmation[2]. The architect for the Lodge was Preston J. Bradshaw (1884 – 1953) of St. Louis. Presentation drawings prepared by Bradshaw were recently discovered by Father Jack Lau, O.M.I. in the main residence. The cover sheet of the drawings was entitled “LODGE for MR. CHARLES LEVIS” by PRESTON J. BRADSHAW – ARCHITECT, 718 LOCUST ST., ST. LOUIS, MO.

What might the connections be, if any, between Charles Levis, Preston J. Bradshaw and the architecture of Principia College?

Charles Levis (1860-1948), was the son of Edward W. Levis (1820-1902), who along with William Eliot Smith, purchased the Illinois Glass Works in 1873.[1] Under the leadership of the new owners, within three years, the company was so successful it needed to expand. Relocating from its original location on Belle Street in Alton, Illinois, the Illinois Glass Company moved to Second Street – a site near the Mississippi River and a railroad right-of-way – in 1875. Sales grew 36 times over in the next thirty years while the number of employees grew from 60 to 3,200.[2] 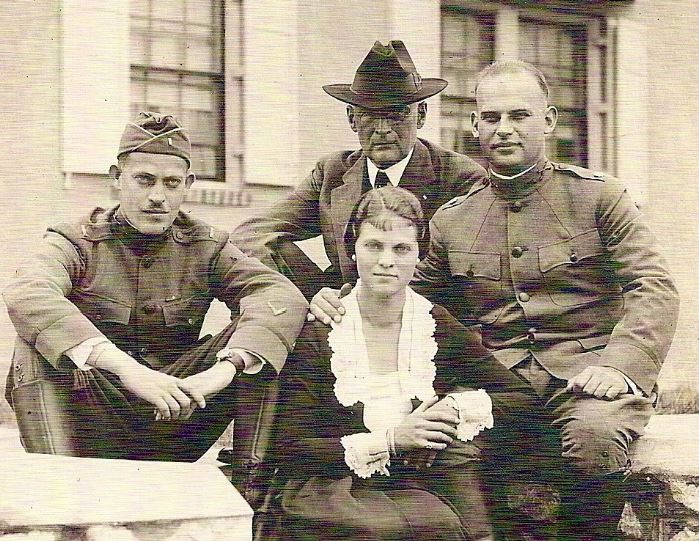 Charles, one of eight siblings, worked with his six brothers in the factory and later in management. The control and management of the company passed to the Levis sons in 1909. In 1910, one of the automatic bottle machines made by the Owens Bottle Company of Toledo, Ohio, was licensed and installed at the Alton plant, replacing a labor-intensive process of hand blowing glass bottles. By 1915, all of the bottles were produced by the new technology. By 1928, there were additional plants and subsidiaries, with the Alton plant now the largest individual bottle manufacturing factory in the world. In 1929, the Owens Bottle Company merged with Illinois Glass, forming the Owens-Illinois Glass Co. The next year, William E. Levis, Charles’ son and grandson of the founder, was named president, and his cousin, J. Preston Levis, took over management of the Alton plant. The company later developed a new industry exploiting glass fibers to make glass mineral wool for insulation and fiberglass. Glass bricks (or blocks) for the building industry were also produced by the company.

Interestingly, it would be the glass blocks produced by Owens-Illinois Glass Co. that would lead to a connection with Principia College. Bernard Maybeck was the architect and planner of Principia College from 1923 to 1939. During one of his trips through Alton, Illinois, he noticed the use of glass bricks in a building there. He was designing the Watson Laboratories Building (1934-1935) on the campus and decided to incorporate this modern material into his building for the sciences.[3] Glass block clerestories on two sides of the rooms produced abundant natural light, resulting in highly functional and very comfortable classrooms and labs. This is a feature which I continued to incorporate in the design of the Science Center Addition (1995-1998) to the Watson Building.[4]

Owens-Illinois Glass Co. did, in fact, supply the glass blocks (double and half double flint block units) for the Watson Building. [5] This was confirmed by Kris Impastato, former Archivist of Principia College, who found the invoice for the glass blocks (11/21/34) placed with the Dickie Construction Company.  Field Report No. 167 noted that a truck load of glass brick arrived at the construction site on November 22, 1934. Maybeck had indeed incorporated the modern material into his design.

Charles Levis had made “La Vista,” a fruit farm atop the river bluffs near Godfrey, Illinois, his home by at least 1923.[6] A newspaper article on October 8, 1934, reported that Charles Levis had “been making extensive improvements on his place and now has one of the finest country homes to be found anywhere.”[7] The same article noted, “During the summer Mr. Levis had built a summer house, a lookout, on the edge of the cliff and while it has been enjoyed during the summer it had not been given a complete dedication until yesterday when the birthday party was held.” 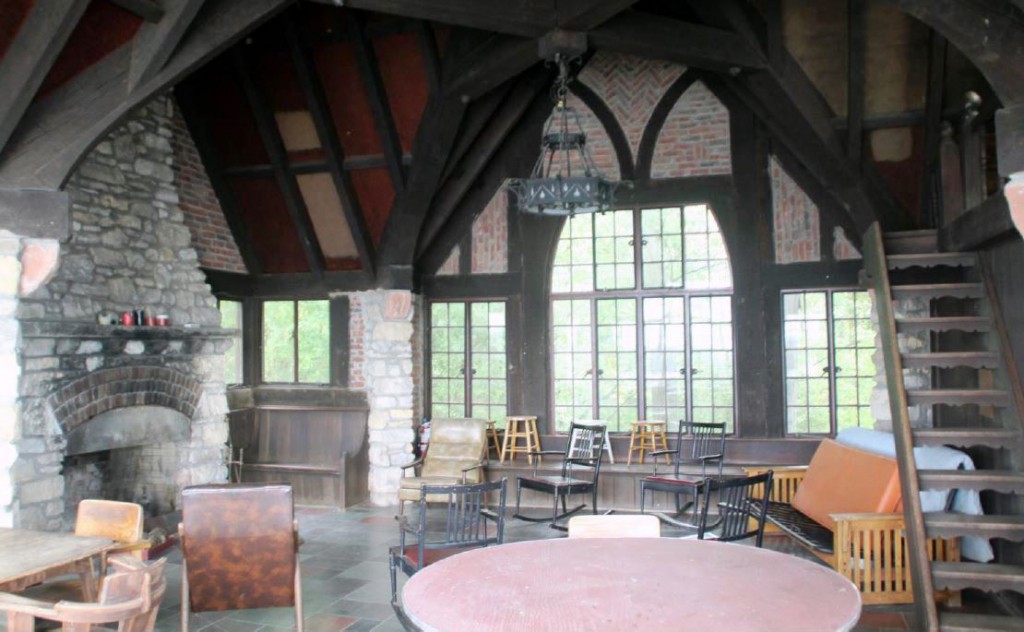 Interior of the Lodge. Photo by John C. Guenther

This “lookout” was the Lodge, designed by Preston J. Bradshaw, Architect. The design of the Lodge was realized in a beautiful English Vernacular style and made use of red clay tile roof, infill panel walls of half-timber and brick, and steel sash windows painted a rose color. The interior features a dramatic vaulted living space supported by exposed heavy timber beams, with a stone fireplace set within an inglenook placed off to the west side. A custom-designed, metal chandelier features cutouts of backlit glass bottles – an appropriate gesture for one of the owners of Owns-Illinois Glass Co.

How did such a design come to be? Did Charles Levis visit Principia College during its construction to see this major project designed by one of the country’s leading architects? After all, his company did supply the glass blocks for the Watson Building. Did Levis become captivated by the look and feel of the Cotswalds English Village architecture created by Maybeck? Did Levis take Preston J. Bradshaw, his architect for the Lodge, to see Principia College – the masterwork of Maybeck – in order to see firsthand this college under construction about 5 miles upriver on the bluffs above Elsah? The remarkable similarities of the style of design, the use of materials, colors and textures, and the dates of construction – The Lodge in 1934 and the Watson Building (1934-1935), not to mention the other campus buildings begun in 1931 – all lead one to conclude that this is a likely possibility and to answer “yes” to all or some of these questions.

And how did Preston J. Bradshaw (1884-1953) come to design the Lodge? Bradshaw, who was born in St. Louis on June 19, 1884, studied architecture at Columbia University in New York in 1899 and 1900.[8] After briefly returning to St. Louis, he returned to New York in 1903 to study in the studios of Henry Hornbostel and Donn Barber, two of that city’s most prominent architects, and later served as a draftsman for the preeminent architectural firm of McKim, Mead & White. He returned to St. Louis in 1905 and was employed as a draftsman by the city’s Commissioner of Public Buildings before establishing his own architectural practice. Early projects included a residence for Mr. and Mrs. Adolphus G. Meier, 6248 Waterman in Parkview (1907) and the Bradshaw Residence, 5947 Clemens (1908).

[1] History of Madison County, pg. 1207
[2] Owens Joins with Illinois http://www.utoledo.edu/library/canaday/exhibits/oi/OIExhibit/OwensIllinois.htm
[3] Construction, Phase 2, pg. 261; Bernard Maybeck at Principia College The Art and Craft of Building by Robert M. Craig; Gibbs Smith Publisher
[4] John C. Guenther, FAIA, LEED AP designed the Science Addition and the Wanamaker Hall addition while he was a Principal with Mackey Mitchell Architects, Firm of Record.
[5] “Flint glass” has become a synonymous term for lead crystal, though flint is no longer part of its composition. It is typically the clearest glass available and free of coloring. Research information was provided to the author by Walter Sedovic, FAIA, LEED and Jill H. Gotthelf, AIA, FAPT of Walter Sedovic Architects.
[6] Alton Evening Telegraph, April 10, 1023 in an article on Godfrey on page 9: “Now the farm is owned by Charles Levis who has built a beautiful home on the bluff.” courtesy of the Hayner Public Library, 326 Belle St, Alton IL 62002
[7] Alton Evening Telegraph; Monday, October 8, 1934: Charles Levis Has Birthday Celebration, courtesy of the Hayner Public Library, 326 Belle St, Alton IL 62002
[8] For an overview of Bradshaw’s life and works, please see Preston J. Bradshaw, AIA (1884 – 1953) by Lindsey M. Derrington, Research Associate, for Landmarks Association of St. Louis, Inc.
http://www.landmarks-stl.org/architects/bio/preston_j_bradshaw_aia_1884_1953/ 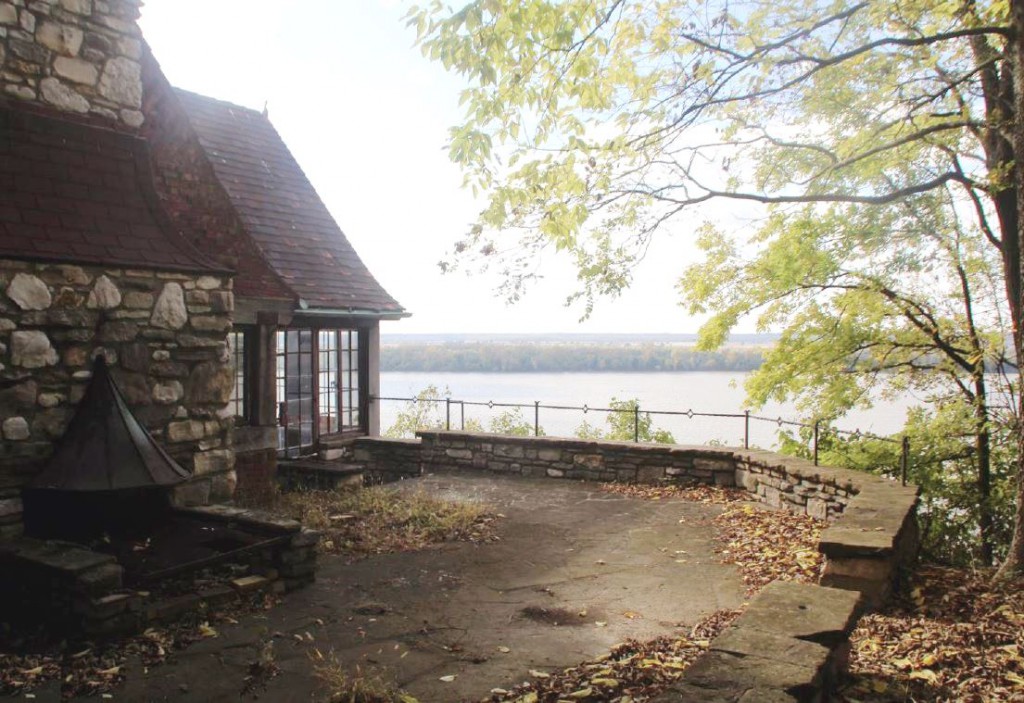 View from the Lodge’s Terrace. Photo by John C. Guenther

How Preston J. Bradshaw came to be engaged by Charles Levis for the design of the Lodge is not known to author at this point. In speaking with Bradshaw’s daughter, Judith Bradshaw Miller, it appears that the records of her father’s architectural practice are no longer in existence, so the answer to this remaining question (and others) will need further research or perhaps remain unanswered. [1]

One thing is for certain. The Lodge by Preston J. Bradshaw, while not among his largest works, is certainly among his most beautiful. Being perched at the bluff’s edge high above the Mississippi River contributes to its beauty and drama. The weather conditions of this location, along with its age, also contribute to its current condition and the need to take preservation actions as soon as practical. The beauty of this remarkable work of architecture which Charles Levis and Preston J. Bradshaw created in 1934 needs to continue to reward current and future generations who may have the opportunity to visit, experience its spaces and contemplate its rich history.