Vatican Radio reported that for the celebration of the 200th anniversary of the founding of the Oblates, a relic of the heart of St. Eugene de Mazenod has been offered to the faithful of Senegal and Guinea Bissau for veneration. The relic began its journey on January 16 from the Cathedral of Dakar. On January 23-24, it was at the National Shrine of Our Lady of Liberation at Popenguine where the Missionary Oblates had their jubilee celebration. Cardinal Theodore Adrien Sarr presided at a solemn Mass on the 24th. Of special interest is that Cardinal Sarr can find the Oblate Founder in his own episcopal lineage: the Cardinal is ninth in a line of succession from St. Eugene. The Oblates have been present in Senegal for 40 years. 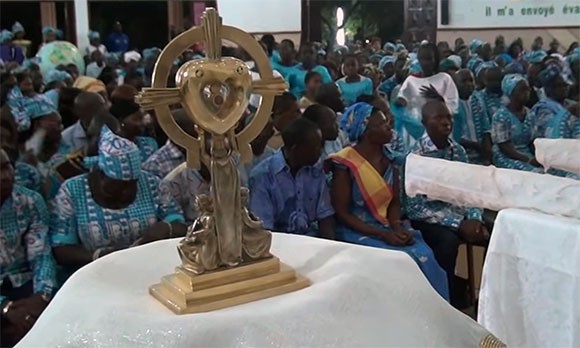 The veneration of the relic of the heart of St. Eugene de Mazenod is meaningful because the Founder often spoke of his own heart. He put it at the center of his life with his love of God, the people and his confreres. For that reason, he wanted it to be, even after his death, a symbol of his affection for all who knew him.

The Oblate Historical Dictionary, Volume I, states under the rubric Heart of the Founder: “In conformity with a custom which was formerly commonly accepted, the Founder wanted to leave as an inheritance to his Oblates his heart, the symbol of his affection. In his will drawn up August 1, 1854, he declared: ‘I would have been really happy if after my death my heart were placed in the sanctuary of Notre-Dame de la Garde at the feet of our good Mother whose temple I have had the happiness of rebuilding…” (Oblate Writings I, vol. 15, no. 191, p. 251) On January 20, 1861, in a codicil attached to his will, he specified: “It is my wish that my heart, divided in two, should be deposed, one half in the sanctuary of Notre-Dame at the feet of my Good Mother, and the other be deposed in the midst of my sons at Montolivet.’”

Over the course of the years, the holy relic of the Founder has had various homes and has been further divided several times.