By John Unson (philstar.com) Originally Published by the Philippine Star 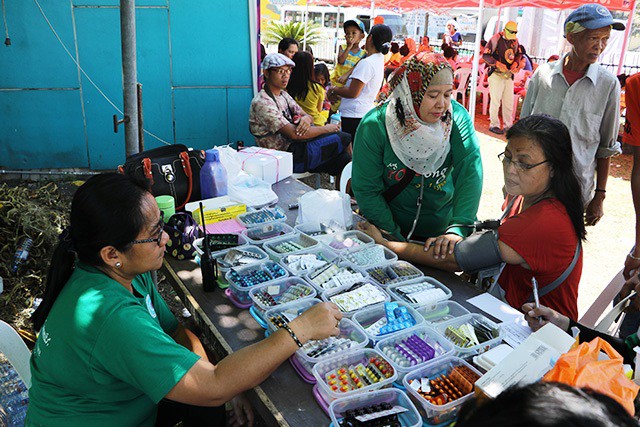 COTABATO CITY, Philippines – An influential radio station established in 1957 by a Vatican-based congregation, where Orlando Cardinal Quevedo belongs, capped off its 59th founding anniversary Thursday with humanitarian missions for the city’s poor.

The popular dxMS here, one of the six stations in Central Mindanao of the Notre Dame Broadcasting Corporation of the Oblates of Mary Immaculate (OMI) congregation, is known all throughout for its in-depth and analytical reporting on Mindanao issues.

The station also has reporters and news writers who are experts in peace and conflict-sensitive reporting, trained by various local and foreign entities helping push the Mindanao peace process forward.

The multi-awarded dxMS, in fact, pioneered “peace journalism” here in the 1980s, in support of the OMI’s advocacy for interfaith and cultural solidarity among the local Muslim, Christian, and Lumad folks, referred to, in technical parlance, as “tri-people” of Mindanao.

Employees of dxMS, led by their manager, Carlos Bautista, initiated a day-long outreach activity on Thursday with the help of the Maguindanao People’s Medical Team, the Cotabato City Medical Society, and other volunteer organizations patronizing the peace advocacy programs of the OMI congregation.

Jeffrey Mendez, a senior staff of dxMS and coordinator of Thursday’s medical, dental and veterinary missions, said dozens of pet owners had their dogs vaccinated for rabies by personnel of the Cotabato City Veterinary Office as part of the outreach activity.

Medical and dental personnel from the office of Maguindanao Gov. Esmael Mangudadatu, led by provincial budget officer Lynette Estandarte, had served more than 500 elderly folks and children during the event.

Health workers from the Cotabato City government vaccinated with anti-pneumonia vaccines no fewer than 100 children brought by parents to the dxMS compound in the city proper, venue of the outreach missions.

The influential and popular dxMS is Central Mindanao’s oldest radio outfit, established by the OMI as a vehicle for evangelization among Christians and as a medium for propagation of religious and spiritual solidarity among the region’s culturally-pluralistic residents.

The OMI, whose first batch of seven missionaries, led by French-Canadian Gerard Mongeau, arrived in Mindanao from abroad before World War II, has since been engaged in missionary works for southerners with different religions.

The congregation has also been propagating “culture of peace” among Muslims, Christians and indigenous non-Muslim Lumad people in Central Mindanao and in the islands of Sulu and Tawi.

Tawi-Tawi and Sulu are now both component provinces of the Autonomous Region in Muslim Mindanao (ARMM).

In a text message, ARMM Gov. Mujiv Hataman acknowledged the support of dxMS and its sister-stations in providing the public adequate updates on his administration’s infrastructure and socio-economic thrusts in the autonomous region.

“For that, we are very grateful. We also support the peace-building activities of the Oblate community in Mindanao,” Hataman said.

The multi-awarded dxMS and other media outfits of the OMI in Mindanao were shut by the military right after President Ferdinand Marcos imposed martial rule in 1972, but reopened immediately after committing to air or publish only balanced, non-agitating reports on government activities.

Besides dxMS, the OMI also operates AM stations dxND and dxOM-AM in the cities of Kidapawan and Koronadal, both in Administrative Region 12, respectively.

The OMI also has FM stations dxOL, dxDM dxOM-FM, all involved in peace-building activities of Quevedo, who started as an Oblate barrio priest in Mindanao and rose to become the highest Catholic parochial leader in Southern Philippines.

The OMI was founded in the 17th century by the now Saint Eugene De Mazenod.

De Mazenod was a scion of the powerful French aristocracy, who ignored elitist social norms separating the poor and the wealthy and lived with the impoverished communities whom he started serving even before his ordination to priesthood.

For his having established missionary ties with the poor, De Mazenod caught the ire of the French elite, but went on with his works undaunted just the same.