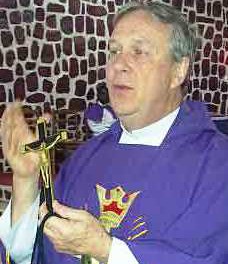 (Vatican Radio)  Catholic faithful in Turkmenistan make up only a tiny proportion of the central Asian country’s predominately Muslim population, of which most are diplomats or descendants of Polish immigrants.

The Holy See in 1997 entrusted the Missionary Oblates of Mary Immaculate(OMI) with the Church’s mission to Turkmenistan, creating an Apostolic Nunciature in the capital city, Ashgabat, and nominating Fr. Andrzej Madej, OMI, its Chargé d’Affaires. It falls under the jurisdiction of the Apostolic Nuncio to Turkey and Turkmenistan.

Fr. Louis Lougen, Superior General of the Oblates of Mary Immaculate, recently visited the Oblate mission in Turkmenistan. He spoke to Devin Watkins about his experience of the small but vibrant Church there.

Going to Turkmenistan was like living or being in the church of the Acts of the Apostles.” Fr. Lougen said, “It’s a church of signs and wonders. It is amazing. We’ve been there 18 years. When we first went, there were a few Catholics in the country, and some of them were descendants of Polish families who had gone there, I think, before World War II. The memory of being Catholic was in their families.”

Turkmenistan’s government greatly restricts the establishment of religious groups so in 1997 Fr. Andrzej Madej, OMI, and Fr. Radoslaw Zmitrowicz, OMI, entered the country as diplomatic representatives of the Holy See. These two Oblates were the first Catholic presence in Turkmenistan since the Catholic churches were destroyed by Russian revolutionaries almost 100 years ago.

Fr. Lougen recalled the humble beginnings of the Church’s mission in Turkmenistan. “The first Oblate who went there, with the help of a layman, got together all these families that were Catholic… Some were families that had been Catholic but with Communism had lost the opportunity to practice. [Fr. Andrzej] got them together – I think that was about 15 or 20 people – and began to catechize, invite them to RCIA faith formation.”

Click here to read the rest of the article and listen to the interview with Fr. Lougen.