Originally Pubished on the omicongresswyouth.blogspot  By Fr. Shanil Jayawardena, OMI 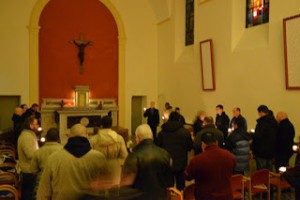 On the night of the 6th of March the Congress of the Mission with Youth began with a beautiful prayer that touched the hearts of the participants. We started walking through the streets of Aix, two by two, observing the young people passing on the street. Upon entering the cloister we could feel the change: from the noise to silence. The small lamp that on other days illuminates the Foundation Room was brought to the cloister outside, which made us think about the passage from darkness to light, from emptiness to fullness. Then we were reminded of the 300 young people that Fr. de Mazenod originally had in his youth association in Aix. It was in the chapel of the Aix house, where Eugene de Mazenod met with them and prayed with them. Therefore as a mark of remembrance of those 300 youth, each of the participants (we were 30 altogether) carried a list of names of 10 youth whom we are working with, in procession to the chapel altar. At the end of the evening prayer we were invited to take the list of another participant and pray for these young people during  the congress. 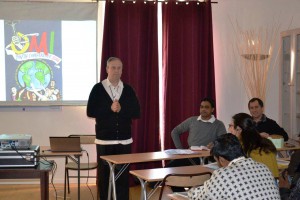 The morning of the 7th began with a prayer. Fr. Krzyzstof, the present Superior in Aix, presented to us the figure of Fr. Courtés, one of the first Oblates who originally belonged to the Youth Association of Fr. De Mazenod and who later became an Oblate. Fr. Courtés had also been the Superior of the Aix community where he lived for forty years. During the morning session Fr.Louis Lougen the Superior General addressed the participants encouraging everyone to get actively involved in the congress to help discern our mission with young people today. Then Fr. Chicho elaborated on the historical background of the mission withyouth in the Congregation. He also explained how we shall go about during the Congress. After that, all gathered according to different Oblate regions, to discuss on the reality of the young people in each region.