(The Peninsula Clarion is one of Alaska’s most widely recognized daily news publications. The Clarion is located in the Kenai-Soldotna area, the Missionary Oblates also serve in that region.)

Photo by Ben Boettger/Peninsula Clarion Father Mark Dean displays a traveling icon of Jesus and Mary he painted on a stone.

Father Mark Dean traveled from Illinois to serve for two weeks as a guest priest at Soldotna’s Our Lady of Perpetual Help Catholic church. On Feb. 21, he taught a seminar at the church on a skill he had picked up on another trip as a visiting priest — he had previously spent nine years in Sweden, where he learned to paint icons in the Byzantine style of the Eastern Christian Church.

After eastern and western Christianity split in late Roman times, western religious art followed a path that would lead to the vivid, three-dimensional-seeming painting of the Renaissance, while eastern art gave rise to icons, a word from Greek, meaning “image.” These were flat, stylized depictions of Biblical events, or frontal portraits of Biblical figures and saints, that were more symbolic than naturalistic. According to Father Thomas Andrew, Archpriest of Kenai’s Holy Assumption of the Virgin Mary Russian Orthodox Church, the practice of image-making is as old as Genesis.

“When God created man, he said, ‘Let us make him in our image and likeness,’” Andrew said, referring to Genesis 1:26-27. “So everyone we see, no matter who they are or what they are, they’re made in the image and likeness of God. They’re icons. Walking, living, talking icons.” 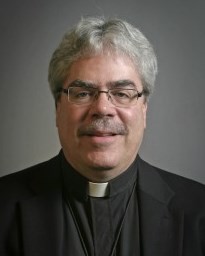 Although icons originated in Eastern Christianity, they also play a role in the Catholic church, where Dean said their theological significance is related to the incarnation of Jesus.

“There are other great religions — the Muslim religion being one of them — that forbid the depiction of God in any kind of form,” Dean said. “The Christian Church has said, ‘But God has taken on human form, in Jesus Christ. So he has given us a human face. And just as we can depict humans in portraiture and art, so can we depict the word made flesh and the word made visible through Christ. So Christ is the icon par excellence, the image of God made visible. He’s the first subject matter of icons, and after that those who have been illumined by the light of Christ, the saints.”

“I got involved with icons back in the early ‘90s, when I was assigned to a parish we had in Luleå, in the North of Sweden,” Dean said. “… In Sweden, the number of Catholics up there was just under 2 percent of the general population, so you can imagine that the life of a priest is at a slower pace. I lived out in the woods — in fact, it looked a lot like these woods around here. … With more time on my hands, there was more time to pursue interests and develop hobbies.”

Click here to read the rest of the story