Each Oblate community of the Polish Province has its own schedule of celebrations to mark the Congregations’ bicentenary. Three of them – the Provincial House in Poznan, the scholasticate in Obra and professors’ community in Warsaw – commemorated the first community of Aix-en-Provence in a particular way.

At Obra, on Sunday, January 24, after each Eucharist the parishioners and the MAMI communities were welcomed in the scholasticate cloister. There, they were offered cake and coffee. The Oblates were around to chat with guests and express personally their joy of 200 years of Oblate history. MAMI members stayed with us also for lunch and enjoyed the traditional afternoon recreation with the community. 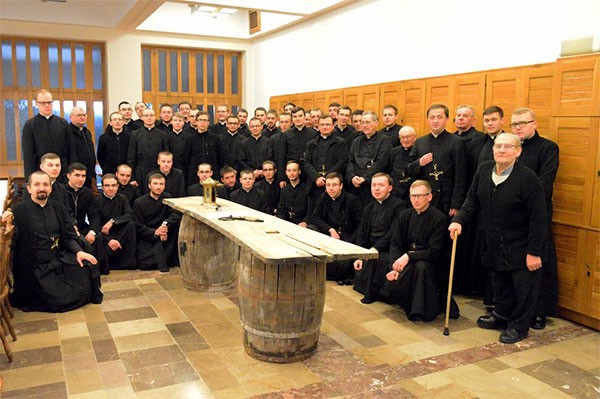 The next day, January 25, upon entering the refectory, we found a touching symbol: two barrels and a piece of wood on top of them, clearly resembling the Founder’s recollection of the first days in Aix. Everybody could sign a petition to the vicar capitulars with an old style pen, presumably similar to the one used by Saint Eugene. There was also a small exhibition of original texts written by the Oblates in 1816 and photographs of our mother house in Aix.

In the afternoon of January 25, the whole scholasticate community went to the provincial house in Poznan, where the main liturgical celebration took place, with the auxiliary bishop of Poznan presiding (the archbishop couldn’t be with us as he was at that time on an official visit at the Vatican). The main celebrant was accompanied by Father Provincial, his administration and council and all the superiors of the Oblate communities in Poland. In the homily, the bishop referred to many aspects of Oblate spirituality which he perceives embodied in daily collaboration and help offered to the local church.

The Eucharist was broadcast worldwide by the Polish Catholic TV station and it was followed by several hours of conversations and interaction with the listeners of Catholic Radio. The Fathers gathered in an improvised studio at the Provincial House presented different aspects of Oblate history, spirituality and current involvements and were ready to answer any questions. It was touching to receive many phone calls from listeners who had a chance to meet the Oblates in one place or another and had warm words of appreciation for their witness of religious life.

A month later, on February 25, the professors from Oblate community in Warsaw organized a symposium on Oblate missions, with the active participation of the majority of the Polish Oblates involved in higher learning. The symposium was held at the Cardinal Wyszynski Catholic University, where the Oblates hold various teaching positions, especially in psychology, philosophy, patristics and missiology.

The day began with the Eucharist and then the participants proceeded to a comfortable conference hall. A series of papers was given concerning Oblate missions in each continent, as well as the charism of the Founder and Oblate missionary spirituality. Since the missionary themes were numerous, the last talk given by a professor from the Congregation of the Divine Word turned into an extremely kind appreciation of Oblate contributions to the development of missiology in Poland. Among many distinguished guest were the authorities of the Faculty of Theology, the director of the Pontifical Mission Societies, the director of the Polish section of “Aid to the Church in Need” foundation, as well as several friends and collaborators, including professors, local pastors and sisters of religious congregations with whom the Warsaw Oblates are involved in their ministry. Everyone received as a gift the book published by the organizers of the symposium, with most of the conferences already printed and some extra texts concerning Oblate history. (Frs. Marcin WRZOS and Pawel ZAJAC)