The Hong Kong-China Delegation celebrated 50 years of missionary presence on 26 February 2016. The Eucharistic celebration was held at Notre Dame Parish where Cardinal John Tong Hon, Bishop of Hong Kong, and Cardinal Orlando QUEVEDO of Cotabato, Philippines, graced the occasion. Also present were all the Oblates of the Delegation and those Oblates from the Asia-Oceania Region who came for the JPIC and Asia-Oceania Regional Conference (AORC) meetings, the religious, the priests and lay faithful of the diocese of Hong Kong. The Cardinal in his homily expressed his appreciation of the Oblate presence in China. During the Eucharist two received the title of Honorary Oblate, Father Joseph So, SDB (Salesian) and Mr. Peter Liu Wing Sun. 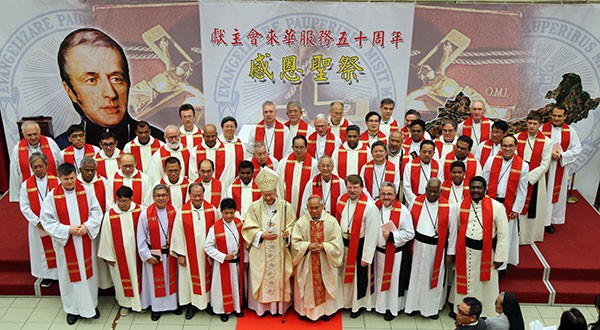 The Oblates first arrived in Hong Kong from the Philippines Province on 25 February 1966, with Fr. Michael MOLLY as the Mission Superior. Soon after their arrival, the Oblates got involved in school work with the construction of Notre Dame College. The Oblate presence was aptly called the “Hong Kong Mission” and was focused on education and pastoral work from the chapel attached to Notre Dame College. Later the Oblates became supervisors of other schools and took on another parish. In March 1990, the China Mission was entrusted to the Australian Province. This Oblate unit became the “China Delegation,” highlighting the change in missionary focus.

The jubilee celebration coincided with a joint meeting of the JPIC commission and of the AORC. There were 24 participants who participated at the joint meeting. The theme of the JPIC workshop was migration. Asia has its own share of migration problems, with people who are forced to cross borders because of wars, conflicts, economic reasons, etc. The workshop was facilitated by Fr. Kennedy KATONGO, the Director of OMI JPIC, together with Fr. Bradley ROZAIRO the JPIC-AORC coordinator. There were talks by various speakers as well as exposure programmes.

The annual AORC meeting continued as usual. Fr. Derrick WARNAKULASURIA, Delegation Superior of Pakistan, could not attend the meeting due to problems renewing his resident visa so as to leave the country. The major and mission superiors spent time discussing and reflecting on the reports that were written by the Units for the forthcoming General Chapter. There was also a brainstorming session on what would be the vision, mission, and possible future focus the AORC Region could offer to the Congregation at large, beyond 200 years of Oblate Foundation. 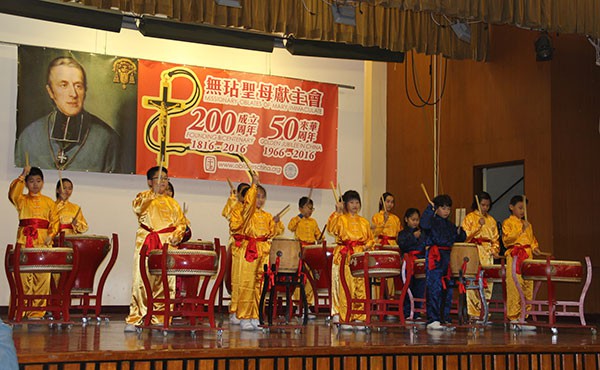 On the day of their arrival, the participants were given a rousing welcome by the Oblates of the Delegation and their associates with Chinese cultural entertainment and a sumptuous Chinese dinner; at the end participants were given various kinds of gifts and souvenirs. What wonderful Oblate hospitality and brotherhood accorded by Fr. Slawomir KALISZ OMI, Delegation Superior, and his team!