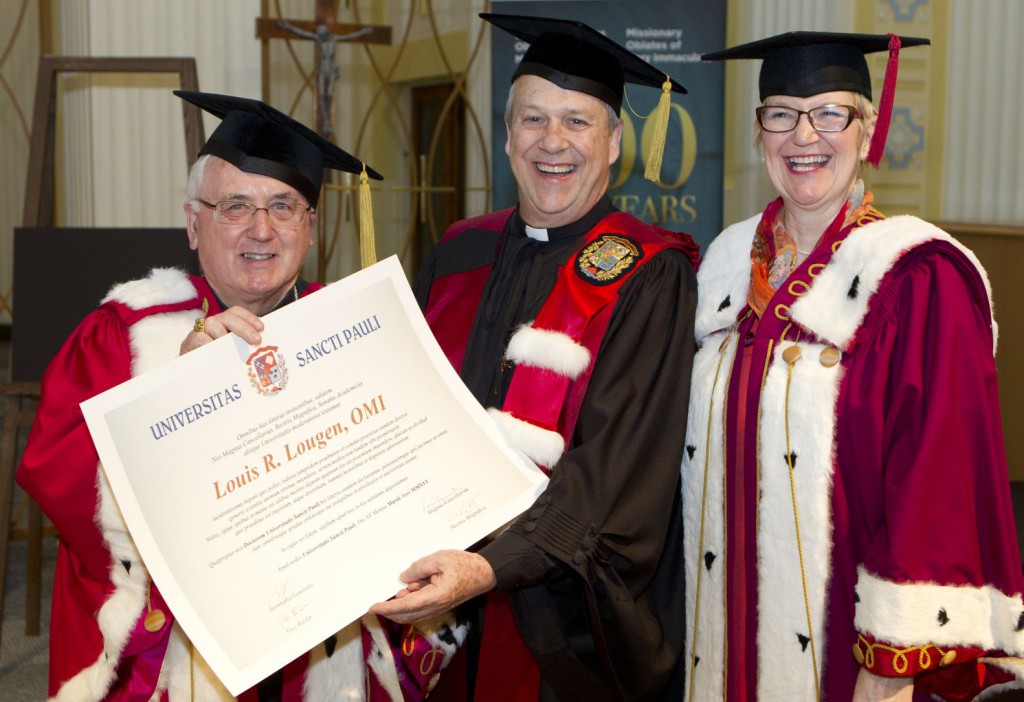 OTTAWA, March 17, 2016 – Saint Paul University (SPU) celebrated the closing of the 200th anniversary celebrations of the Congregation of the Missionary Oblates of Mary Immaculate by granting an honorary doctorate to Father Louis Lougen, OMI, Superior General of the Congregation.

The celebrations began on January 25th, 2016—the feast day of the University’s patron saint and the 200th anniversary of the founding of the Congregation—with the mass of the conversion of Saint Paul. Additional activities included an exhibit showcasing documents, artifacts and photos related to the history and mission of the Congregation of the Missionary Oblates of Mary Immaculate in Canada, and a panel discussion featuring Sister Lorraine Desjardins, SCO, General Superior of the Sisters of Charity of Ottawa, focusing on the Oblates’ past, present and future. 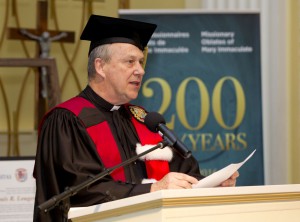 Born in Buffalo, New York, Father Lougen was elected the 13th Superior General of the Congregation on September 28, 2010, by the 35th General Chapter in Rome. Following his ordination to the diaconate in 1978, Father Lougen ministered for six months in Brazil. After his ordination to the priesthood in Washington in 1979, he returned to Brazil, where he worked for 17 years among the poor and marginalized in the former São Paulo Province.

The Congregation of the Missionary Oblates of Mary Immaculate played a major role in Ottawa. Part of the Oblates’ lasting legacy is an educational endeavor that continues to this day through Saint Paul University.

Congratulations to Father Lougen, and thank you to the Congregation of the Missionary Oblates of Mary Immaculate and the Sisters of Charity of Ottawa for your precious insight and ongoing support of our institution.

Saint Paul University (1848) is the founding college of the University of Ottawa, with which it has been federated since 1965. Bilingual and on a human scale, it offers programs in social communication, counselling and psychotherapy, canon law, public ethics, conflict studies, philosophy, human relations and theology.