Fr. Nicholas HARDING arrived at his new assignment in the Delegation of Peru in February 2016. The 64 year old Oblate from the USA had spent several years in the Mission of Baja California, Mexico. Here, he describes some of his first impressions in his new mission.

I have now met all of the men (fewer than 20) and can say they are remarkably amiable and easy-going. … Peru has three main geographical areas and the Oblates have at least one mission in each: (1) The coast: missions in Comas and Chincha; (2) The Andes mountain: Huancayo; (3) The Amazon jungle: Aucuyacu.

Parish Mission at Chincha (Pueblo Nuevo):
Geographically it is many times bigger than the mission I was at in La Morita, Tijuana (Mexico). And the mission serves two or three times as many people as in Tijuana. The parish of Cristo Rey has three main areas. The first area is a lot like Tijuana…a main church with 16 satellite chapels which in turn have comunidades de base. The estimated population is over 100,000 people. They are still paving roads. There are over 1,000 little adobe houses which the Canadian Oblates have built over the years. An 81 year old Brother, Blaise MacQUARRIE, is still active in that work after 30 years. He proudly says that only the Oblates in Peru have a gravel pit. There is still visible destruction from a terrible earthquake in 2007. …

The second section is a vast area of shacks (estimated population, 100,000) where there is no running water or sewage. One sees children bathing in the acequia, a canal fed by river water. As in Tijuana, trucks with water tanks come around to fill barrels. None of the roads are paved so there is a lot of dust. At the far end is a prison served by the parish. Brother Blaise recently obtained 1,000 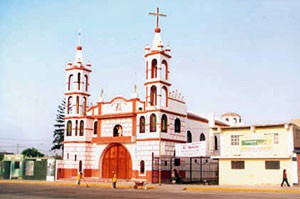 blankets and material for handicrafts, even though it is a high-security prison. He told me he began outreach there after he had a mystical experience telling him to go there. The government only provides food…nothing else. There are 2,000 men incarcerated there.

The third sector is the sierra…high mountains with river valleys populated only by indigenous people. There are a few towns like Chavin and San Pedro Huanacapa (a six hour drive from the parish on unpaved road). There are only two Oblate priests and the Brother, but several religious sisters and many laypeople take seriously their baptismal call of co-responsibility as disciples in mission.

Comas:
Recently we had a big event here to celebrate 50 years of OMI presence and the 200thanniversary of the founding of the OMI’s. The bishop came for the main mass and afterwards there was entertainment, mostly folklore dancing by the youth. This parish is also quite extensive. A Dutch Oblate has, over the years, constructed one hundred comedores (food pantries) for nutrition and building community.

Future: I will soon head out for a week or so to the mission in the Amazon and then, for Holy Week, the one in the Andes with the indigenous people. Afterwards, there will be a discernment of where I should go…where I best fit to serve the Lord and help build his Kingdom. … Each site has its blessings and crosses/challenges. I will try to heed the advice given to me by old missionary priests: “Be natural, be yourself.”–“Be like a child.”–“Waste time with the people.”–“Help everyone see they are called to be disciples and missionaries.”