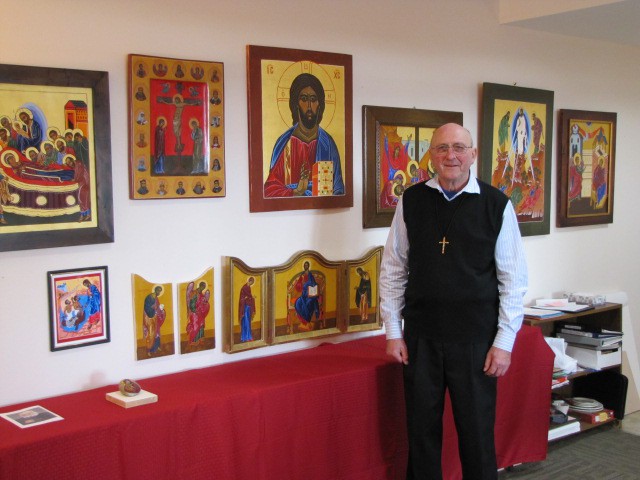 Fr. Clyde Rausch, OMI next to some of his work at his San Antonio studio.

Renowned as a teacher, preacher and iconographer, the South Dakota roots of Fr. Clyde Rausch, OMI are evident in his friendly manner and casual demeanor, but when he talks about his ministry of painting icons there is a special excitement in his face and voice. Fr. Clyde became interested in the priesthood while still in high school. He knew he wanted to be a missionary which brought him to the Missionary Oblates of Mary Immaculate. After ordination he spent 29 years as a missionary in Sweden and it was there that this man, “who never painted anything except buildings,” became fascinated with the ancient liturgical art of painting icons (iconography). 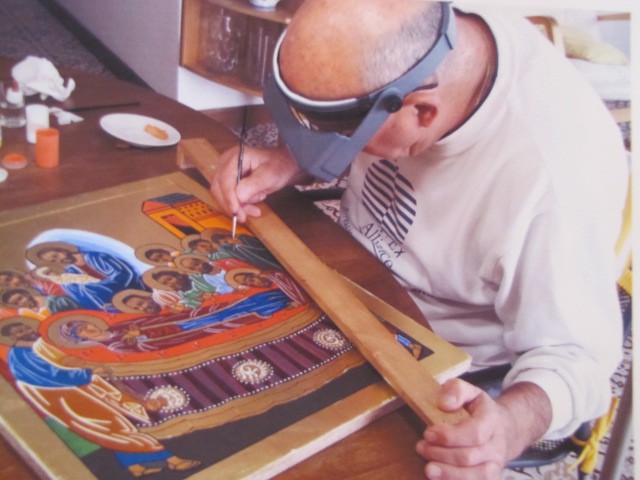 Fr. Rausch uses tiny brushes to paint using a mixture of egg yolks and powdered pigments that he mixes himself

In 1969, the newly-ordained Fr. Rausch was sent to a parish in Täby, Sweden. It was there that he first met Swedish Oblate Brother, Olof Åsblom. But it would be years later, in 1986, that Fr. Clyde and Brother Olof would discover their call to iconography when they sponsored a course in the art at the Mariebäck Retreat House in Luleå, Sweden. Fr. Clyde recalls that he thought the serene nature of religious icons would have special appeal to the characteristically quiet and reserved Swedes.

Fr. Clyde points out that new trends in church art developed during the Renaissance, “… painters from Belgium, Germany and other countries tended to be much more detailed than the simpler art form  from earlier Swedish artists”

That first one-week course, taught by Fr. Johannes Deurloo, a Dutch Orthodox priest, captured the interest of local village people from all denominations and especially Brother Olof and Fr. Clyde. From then on, the two Oblates began painting icons and teamed up to teach courses in iconography throughout the year between visits from Fr. Deurloo.

Fr. Clyde came back to the states in October 2013 and now resides in San Antonio, Texas where he continues to paint in his studio at the Oblate Retreat Center. In addition to painting reproductions of early Orthodox icons, he creates some original ones and conducts classes at the Oblate School of ­Theology on the theology of icons, gives retreat conferences using icons, and teaches the technique and prayer method of painting/writing icons.

The liturgical art of painting icons is an ancient one. In the Christian tradition it goes back as far as the first century A.D., when the famous icon of Mary and the infant Jesus which hangs in the Basilica of St. Mary Major in Rome, Salus Populi Romani, is said to have been painted by St. Luke the Evangelist.

Later, icons became very popular in the Eastern Orthodox Church and were meant to visually tell stories from the Bible. There were very strict rules about what colors should be used along with who and what needed to be depicted in the various scenes based upon the text from the Bible.

Icons of the Eastern Orthodox Church didn’t allow for artistic license. Almost everything had a symbolic aspect. The Biblical subjects of the icons had very consistent facial features and tended to be represented in the same pose. Color also played an important role: gold, in the sky, represented Heaven; the clothes of Christ and Mary: red, divine life, blue was the color of human life, etc.

In this icon titled, “Call of Peter and Andrew,” Fr. Rausch allows part of Christ’s cloak and halo to flow over the frame, bringing it into our world today.

According to Fr. Clyde, Christian icons are not just representations of Biblical events. In the prescribed format of icons, the outer frame represents the border between heaven (the picture) and “the world today” (outside the frame.) The faces of the people in the pictures are “serene,” the art takes the view that we are seeing them not as they were, but as they are now (saints in heaven).

A feature of some of Fr. Clyde’s icons is that part of the picture crosses over the frame into “the world today,” symbolizing that the event is as present today as it was in the past. According to Fr. Rausch, one of the special attributes of icons is that, “The picture will pull you into it, or it will come out to you.”

These days, Fr. Clyde’s reputation is such that he sometimes is commissioned by churches to create special icons for their sacred spaces. One example is a recent project depicting Mother Teresa with the Blessed Mother holding the infant Jesus that was commissioned by the Blessed Teresa of Calcutta Parish in Wisconsin. 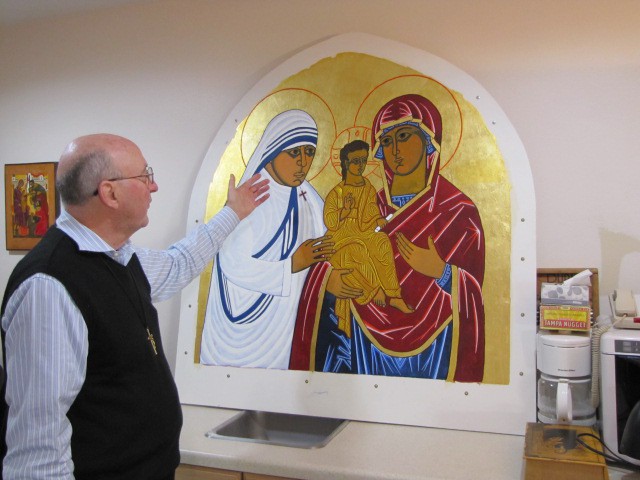 Fr. Rausch shows his original creation featuring Bl. Teresa of Calcutta with the Blessed Mother and the Christ Child.

For the future, Fr. Rausch hopes to continue painting a series of icons coinciding with the events of the liturgical year. His work is now being published in card-form and anyone interested in more information can contact Fr. Rausch directly at: rausch.omi@gmail.com.