Reprinted with permission from The Sun of Lowell

LOWELL — When St. Joseph the Worker Shrine opened in 1956, its mission was to provide a haven for the Catholic working class in the mills and Lowell’s French Canadian population.

A large population of French Canadian immigrants had come to Lowell in the late 1860s, yet few of the religious teachings were in a language they could understand. 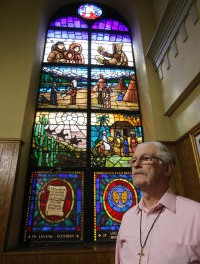 Brother Richard Cote, O.M.I., curator of the Oblate Historical Museum, stands by one of the shrine s stained-glass windows, which have medallions at the bottom representing various trades and professions. SUN /JULIA MALAKIE

This changed when Saint Eugene de Mazenod, O.M.I., according to the shrine’s website, worked toward speaking and worshipping in a language that the immigrants could understand. His mission, which began in 1868, eventually turned into the sprawling St. Joseph that now stands.

Yet now, nearly 60 years after it opened, it hopes to be a haven for all.

“That original purpose of reaching out to French Canadians has now evolved into reaching out to many other nationalities,” said Brother Richard Cote, the shrine’s historian. “…We’re always evolving.”

St. Joseph is not a parish, Cote explained, because it doesn’t host baptisms or weddings. Rather, the downtown Lowell church offers daily Mass, counseling services and confession.

Nearly every week, he estimated, about 500 to 800 people visit the shrine.

As some 20-some churchgoers left the noon Mass on a recent Monday afternoon, they reflected on what St. Joseph has given them in the 60 years it’s been standing.

Click Here to Read the Rest of the Story