The celebration of the bicentenary of the Oblate family (1816-2016) has given us the opportunity to focus on certain elements that influenced the development of the Congregation in Canada since its beginnings there in 1841. Already the Rule of 1818 contains five articles that dealt with Brothers as a given since most religious congregations of the time had both priests and non-priest members. After the approval of the Constitutions by Rome in 1826, the Brothers were so much a part of the Congregation that the Founder placed them, as much as possible, in all the houses of France and then he added them to all the missionary teams abroad: Canada in 1841; Oregon and Sri Lanka in 1847; Algeria and Texas in 1849; Natal in 1851 and British Columbia in 1859. 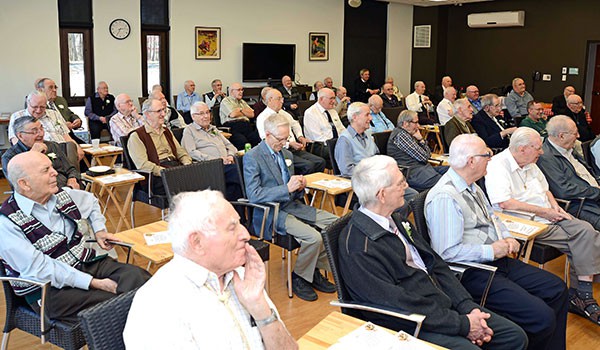 At our house in Richelieu, last March 19, the feast of St. Joseph, Patron of our Brothers, the Notre-Dame-du-Cap Province paid homage to the memory of the 1,181 Brothers who, since 1843, professed their vows there: 47 are still living and 328 died in their provinces of origin. Father Luc TARDIF, the provincial, presided at the Eucharist with about 40 Brothers present. In this way, we wanted to celebrate the exceptional contribution of our Brothers to the ministry of the Province and the Congregation. In the afternoon, during a community gathering, a good number of the names of Brothers now deceased were recalled to the memory of the participants. Some of them worked outside the Province: 14 at the General House in Rome and 4 at the Paris Procure; in Africa, 14 in Lesotho and 7 in Cameroon; in Latin America, 7 in Chile, 9 in Bolivia and several in Haiti; in Canada, 21 in Bay James and several in the West or elsewhere in the Great North. It was a joyful and moving day, even historic, probably never to be repeated. 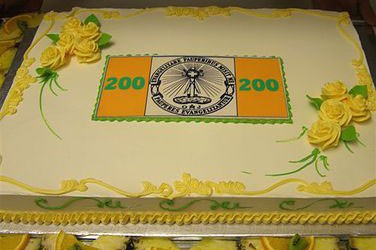 The provincial archives have the obituaries of each Brother who died here. Brother Alphonse NADEAU was the author of 112 of them. They tell at length of the prayer life and work of the Brothers. One could summarize their lives with in one word: consistency, whether it be their presence at prayer and meetings or their service. They loved the Congregation, the Church, the Blessed Virgin. And to that love is added a litany of virtues that characterized them: hospitality, devotion, piety, joy, generosity, zeal, etc.

The work performed by our Brothers varied greatly. The greatest number of them were sacristans, porters, secretaries, messengers, builders, printers, nurses, tailors, gardeners or farmers, but we also find jobs and trades that require further study and diplomas such as welders, plumbers, mechanics, drivers, accountants. Rarer still, there were boat captains and an airline pilot! Some Brothers have left a memory bordering on legendary, such as the sacristan of Saint-Sauveur in Quebec City and Maniwaki for sixty years; the doorman at the University Seminary in Ottawa for forty-six years; another whose skill and talent touched upon the genius!

One author writes: “It must be admitted that they are not the voice that preaches, the pen that writes, the hand that absolves; in our communities, the Brothers often play the role of the heart that is not seen but which we notice by its beats…” Many Brothers were apostles in touch with the people, counselors and comforters. Archbishop Adelard LANGEVIN, OMI, praised the Brothers to whom, he says, we can apply the word of the Church at St. Joseph’s address: “Faithful and prudent men, worthy of confidence … necessary and valuable additions to our communities by the nobility of an unreserved dedication and the rectitude of a life dedicated to God, divided between prayer and work.” “The Congregation would be incomplete without the Brothers…,” wrote Father JETTÉ. “They are a great wealth for the Congregation and for the Church…”

By looking closely at the obituaries, we see that several Brothers are worthy of being considered true saints. St. Eugene said of some of them that if they had been members of some ancient Order, they would already be canonized. Among Oblates, Venerable Brother Antoni KOWALCZYK is already in the process of being considered for that. (Richelieu, Fr. Yvon BEAUDOIN)