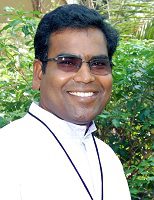 Migrant and Refugee Situation: the Oblates have not been indifferent!

Pope St. John Paul II, in his letter of 25 June 1982 to the United Nations High Commissioner for Refugees, described the plight of refugees as “a shameful wound (scourge) of our times”. He was the first pontiff to speak openly of the refugee problem as “a symptom of global infirmity and of a festering wound.” He dared to pinpoint the refugee problem: “Of all the human tragedies of our day, perhaps the greatest is that of refugees.”

It describes an alarming human crisis of today. More than any other people, the refugees of today embody human suffering and despair: persecution, torture, rape, murder, genocide, ambition of nations, racism, political conflicts, religious persecutions, war, and violations of human rights force them to flee from their own country or to become ‘internally displaced people’ within their own country. They have been cut off from their own people, their history and their culture. This suffering must be a concern for the Church and the Oblates.

As Oblates, our response to the cry of the refugees has been a consoling one. From the very inception of our Congregation, St. Eugene de Mazenod, as a priest, committed himself to the uprooted people in Marseilles, especially to the Italian economic refugees. As a political refugee in Italy, he understood what it means to be a refugee. After he became a bishop, he entrusted this work to Frs. ALBINI, SEMERIA, ROLLERI, ZIRIO and Gallo, who were of Italian origin (cf. G. COSENTINO, Storia della Provincia d’Italia: Ossia la Nostra Congregatione in Italia dai suoi inizi al 1950, Santa Maria a Vico, 1950, p. 21). 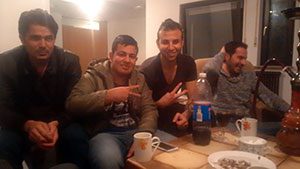 The Oblates in all five regions: Canada-USA, Latin America, Africa-Madagascar, Europe and Asia-Oceania, are involved in different capacities in the pastoral care of refugees and migrants. This is an encouraging and enriching dimension of our Oblate life. Care of refugees and migrants is implied in our Constitution 5: “We are a missionary Congregation. Our principal service in the Church is to proclaim Christ and his Kingdom to the most abandoned. […] Wherever we work, our mission is especially to those people whose condition cries out for salvation and for the hope which only Jesus Christ can fully bring. These are the poor with their many faces; we give them our preference.”

According to the report of the United Nations High Commissioner for Refugees (UNHCR), by mid-2015, the refugee flow had increased an estimated 15.1 million, its highest level in 20 years. (Ref: UNHCR Mid-Year Trends 2015, p.4). The High Commissioner for Refugees, Antonio Gutierrez, said: “This forced displacement is now profoundly affecting our times. It touches the lives of millions of our fellow human beings. Never has there been a greater need for tolerance, compassion and solidarity with people who have lost everything.”

The refugee problem involves moral and ethical principles related to the dignity and fundamental rights of a person. These principles are rooted in the Gospel. The Church document, “Refugees: A Challenge to Solidarity” (1992), concludes with these words: “The tragedy of groups and even of entire peoples forced to go into exile is felt today as a constant attack on essential human rights.”

The Church’s commitment in addressing the root causes of refugees and welcoming them with open arms was shaped in particular from the papacy of Leo XIII up to the present day.

There was no clear teaching on refugees at the beginning of 18th century. The refugee issue was mingled with that of migrants, especially of the European migrants to America. Pius XII organized and restructured the pastoral care for people on the move and published Exsul familia, the Magna Carta of migrants, in 1952.

Following Pius XII, Pope St. John XXIII addressed the refugee issue and stressed the right of every family to migrate when they were not able to meet their basic needs in their homeland. The Second Vatican Council discussed the issue in several documents. The post-Conciliar Popes contributed much to help refugees. Blessed Pope Paul VI called on all people to help refugees regain their dignity and liberty, and Pope St. John Paul II challenged the conscience of the world to stand in human solidarity with them.

Pope Benedict XVI called for the International community to reach out for the protection of refugees. Now, Pope Francis appeals to the world to wipe away the tears of the refugees and give them protection and shelter. He even set an example, by hosting a refugee family in the Vatican.

The central core of the Church’s Magisterium is the dignity of the human person created in the image of God. From this dignity spring the universal and irrevocable rights: ‘the right to dwell freely in one’s own country’, ‘to have a homeland’, ‘to move within it and to emigrate abroad’, ‘to settle in a new place for legitimate reasons’, ‘to live with one’s own family anywhere’, ‘to have at one’s disposal the goods necessary for life’, ‘to preserve and develop one’s own ethnic, cultural and linguistic patrimony’, ‘to profess one’s own religion publicly’, ‘to be recognized and treated in accordance with one’s dignity as a person under all circumstances’, and ‘to be the focus of fraternal solidarity and preferential option’ (PCPCMT, Chiesa e mobilita` umana (1985), p. 366, n. 17; English trans. in CLD, 9 (1978-1981), pp. 133-134).

The Catholic Church embraces the efforts to protect and assist refugees, whether baptized or non-baptized, because of the mandate it has received from its Founder, Christ himself (Mt. 25:35, 40; 28: 19-20; Lk. 10:33-35). Furthermore, the flight of the Holy Family of Nazareth into Egypt morally compels us to embrace the refugees in our compassionate pastoral care. This disposition of the Church is implicit in its universal legislation: “[…] the salvation of souls, which must always be the supreme law in the Church, is to be kept before one’s eyes” (c. 1752).

The Instruction, De pastorali migratorum cura (1969), lists the rights of people on the move, the right of a homeland; to migrate with the family; to keep one’s native tongue and spiritual heritage, and to be ministered to by priests who have a correct knowledge of their condition.

The Document, Refugees: A Challenge to Solidarity, presents the Church’s Magisterium on refugees. It advocates a very broad definition of a refugee: all those who flee from life-threatening situations. The Instruction, Erga migrantes caritas Christi (2004), is the latest update in the Church’s pastoral response to the ‘people on the move’. It recognizes the importance of culture in forced migration. It identifies the various pastoral agents involved and brings out the juridical-pastoral norms at the service of the special care of refugees.

Nobody will deny that refugees are the most abandoned people in the world today. The service to refugees is our challenge today, if we are true to our charism and mission. Our Constitutions and Rules continue challenge us forcefully that it is our fundamental obligation to help to create a society based on the dignity of the human person which, in truth and reality, is denied to refugees. We are challenged by Rule 9a: “Action on behalf of Justice is an integral part of evangelisation. Responding to the call of the Spirit, some Oblates identify themselves with the poor, sharing their life and commitment to justice; others are present where decisions affecting the future of the poor are being made”

Thus, as Oblates, let us continue to let our lives be enriched by the poor – the refugees and migrants, who are at the fringe of society (cf. Rule 8). May we find a great consolation and strength in recognising the hidden face of Jesus, the Crucified Saviour, in the torn face of refugees and migrants, our beloved brothers and sisters!