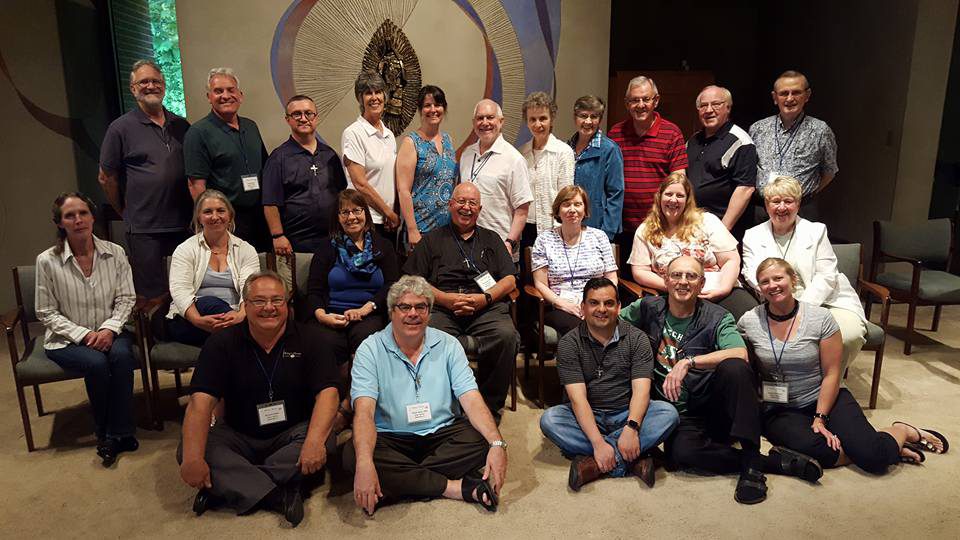 From May 29th  to June 1st of this year, the North American Conference of Oblate Retreat and Renewal Centers (NACORRC) held its 39th annual meeting, hosted this year at King’s House, Belleville, IL.

The theme of this year’s gathering was “Leave No Stone Unturned– Retreat Centers as Touchstones of Mercy.”  At the opening liturgy and ceremony on Sunday evening (May 29th), members were invited to bring a stone from their retreat center, and as they placed it in the Holy Water font, explain a bit about where the stone comes from and what of the retreat center and its ministry it represents.  The stones remained in the water font throughout this meeting, reminding the participants as they entered the Chapel that they “…are blessed by each other, with each other, and through each other.”

During this gathering of NACORRC members participated in three main presentations.  On Monday morning Mark Dean, OMI (staff member of King’s House, Belleville, IL) introduced the group to the practice of Visio Divina.  A painting by the artist Fr. Sieger Köder depicting Elijah in the Cave was used as the image for a session of Visio Divina, after which members shared the results of their reflection and prayer during this “mini-retreat” time.

That afternoon local Dominican theologian Sr. Carla Mae Streeter, OP shared with us her reflections on Retreat Centers as Touchstones of Mercy, and how our ministries both flow from and reveal the true nature of God, whose name is Mercy.   It is this nature of God which causes the Church to make a formal “option for the poor”, and which calls us to be in solidarity with our God, our neighbor, and Creation of which we are a part.  Sr. Streeter concluded the afternoon by leading us in a group discussion based on a recent article by Oblate author Ron Rolheiser, OMI, entitled “Remember to keep ‘Ten Commandments of Mercy’”. –(May 19, 2016).

On Tuesday morning (May 31st) the group viewed a video segment given by Jamie Manson (columnist for the National Catholic Reporter) when she spoke last fall at a conference entitled “New Faces, New Voices, New Ways of Being Church”, sponsored by NCR Publishing Company and Dominican University.   Manson explored some of the generational differences we experience within our society and church, and urged us to look beyond the walls of the institutional church to see how God works not only through Sacraments but also through sacramentals.  “…our sacramental view teaches us that it is impossible to say where the Church begins and where it ends… where God can and cannot be.  …We need to celebrate the ways we are already Church.  …It is our ability to see Jesus not only in the Table of the Eucharist, but also in the Table of the World which makes us Catholic.”

Tuesday evening brought to the gathering a Festive Banquet and a surprise visit from Mme. Marie Rose Joannis De Mazenod (played by local actress Stephanie Rhein), the mother of the Founder of the Oblates.  She brought to light some perhaps overlooked aspects of our early history and founding, and left us with a word of encouragement and hope for our next 100 years.

The final full day of the conference (Wednesday, June 1st) was given to meetings of the NACORRC members among themselves, according to various configurations, ending with a Business Meeting in plenum, conducted by our most competent moderator, Brendan Bitz of Queens House, Saskatoon.

NACORRC #39 concluded with a closing Eucharist, which itself ended with our traditional closing ceremony of the Circle of Friends.  Following this liturgy a group photo was taken[1], and the evening was devoted to final relaxation and socializing among the members as all prepared to head home the next day.

[NB:  The stones gathered from the various Retreat Centers have remained at King’s House, Belleville, and are now placed around the tree that stands in the center of the Labyrinth.]