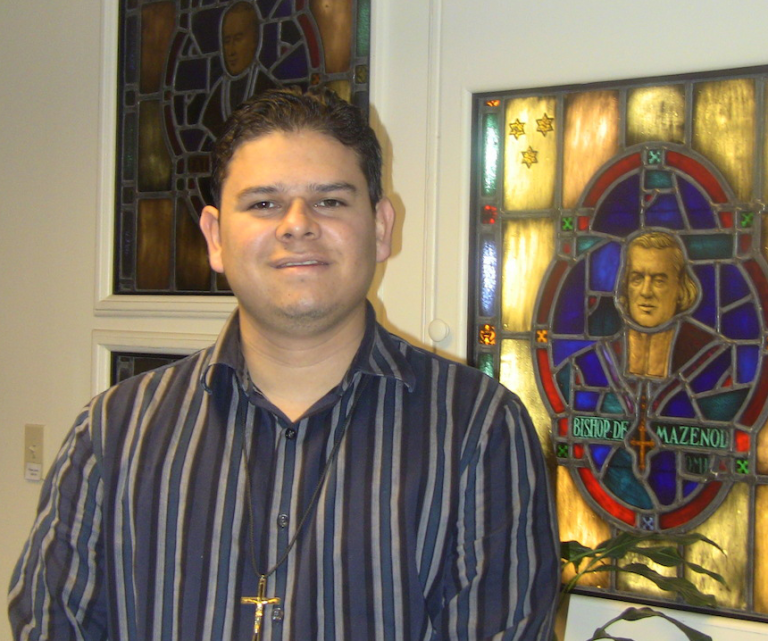 We are pleased to welcome to the JPIC office, Bro. Lester Antonio Zapata, OMI. Bro. Antonio was born in Leon, Nicaragua in 1985 at the height of the country’s civil war. He is the second of three siblings. He obtained his primary and secondary education in a Catholic school run by the Lasallian Brothers, where he was very active in youth ministry.

Bro. Antonio moved to California in 2006, learned English and earned an Associate Degree in Computer Science from Los Angeles Mission College. In San Fernando Valley he encountered two Oblates, now both deceased, who greatly embodied JPIC values and influenced the course of his life: Fr. Darrell Rupiper, OMI and Fr. Leo Leblanc, OMI. After 4 years of discernment, he joined the Oblates of Mary Immaculate in 2010.

He went on to Tijuana, Mexico to study philosophy and upon completion was sent to Godfrey, Illinois to do his novitiate. There he learned more about the Oblate Ecological Initiative and the Community Supported Garden. He professed his first vows in 2015 and now is studying at Oblate School of Theology in San Antonio, Texas. He is spending this summer with the JPIC office in Washington, DC learning about justice and peace issues.

Since his arrival Br. Antonio has been working on Laudato Si one-year anniversary resources, helped out at Three Part Harmony Farm on the Oblate residential premise and volunteered at So Others Might Eat Soup Kitchen in Washington, DC. He is also a budding photographer in his spare time.