By Liz Quirin,  Originally Published in the Belleville Messenger    (Re-posted with permission) 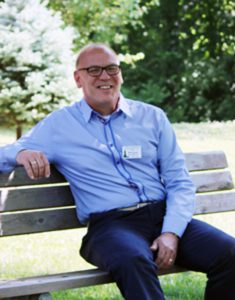 As the King’s House celebrates its 65th anniversary and the Oblates of Mary Immaculate celebrate their 200th anniversary, they look to the future with excitement and energy, much the way their new director does.

Deacon Boyer retired from Solvay Fluorides as a laboratory manager after 27 years and switched into full-time ministry mode. Not only is he the new director at King’s House but he has also been appointed part-time chancellor of the Diocese of Belleville.

Deacon Boyer discussed his new position with King’s House with two former directors: Brother Pat McGee and Father Jim Brobst, both Oblates, who have known and worked with the deacon and his wife, Geri, at the King’s House for a number of years. “Part of our charism,” Father Brobst said, “is to work well with the laity and the broader church.”

Brother Pat said the King’s House formed an advisory board a few years ago to assist with ministry and programming.

The Boyers have been involved with the advisory board and participated as preachers at some of the retreats offered at the King’s House, and the deacon looks forward to becoming more active at the retreat center.

Click here to see the rest of the article