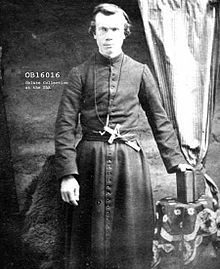 The one Oblate whose Native American grammars and dictionaries are important enough to be collected by the Smithsonian Institution, Washington, DC, is a tragic figure.  Beset with problems with Oblate superiors and perhaps alcoholism, Father Con (Constantine) Scollen, OMI, spent the last 17 years of his life as a diocesan priest in Canada and the USA. Yet Archbishop Adelard Langevin, OMI, successor to Archbishop Alexandre  Tache, OMI, always considered that Scollen had remained an Oblate at heart, and made him an honorary member, perhaps the first priest to be so.

In several ways, Fr. Con surpassed his mentor, the famous Fr. Albert Lacombe, OMI.  Fr. Con’s linguistic abilities were equal to or better than Fr. Albert’s, and he took part as did Fr. Albert in many of Canada’s treaties with Native Americans. For these reasons, the Smithsonian has kept his documents.

Fr. Con was born on April 4, 1841, on Galloon Island, Upper Lough Erne, near the village of Newtonbutler, Co. Fermanagh, Ireland.  His much older cousin, Thomas Louis Connolly, a Capuchin, became archbishop of Halifax, Nova Scotia, in 1854.  Several of his friends had become Oblate coadjutor brothers, so he joined the Oblates as a brother, making first vows on Aug. 15, 1859, with the intention of later studying for the priesthood.

During the visit of Archbishop Tache to Ireland in 1861, Bro. Con volunteered to become a missionary to Canada.  In addition to his extraordinary linguistic skills, he was also recognized as a polymath, musician, historian and theologian. The English historian Ian Fletcher, from whose Wikipedia article most of this is taken, calls him “the foremost linguist in the Oblates of Mary Immaculate, in Canada.”

Bro. Con was ordained to the priesthood in April, 1873, by Bishop Vital Grandin, OMI, after some hesitation by the Oblate superior general.  It was feared that other coadjutor brothers, without Con’s talent, would also want to be priests.

Soon he was asked to establish a farm for the mission, in what would become the city of Calgary. He arranged for his brother, William, to come from England and join him  at the mission farm in 1877. William’s employment became one of the sources of friction between Fr. Con and his Oblate superiors. 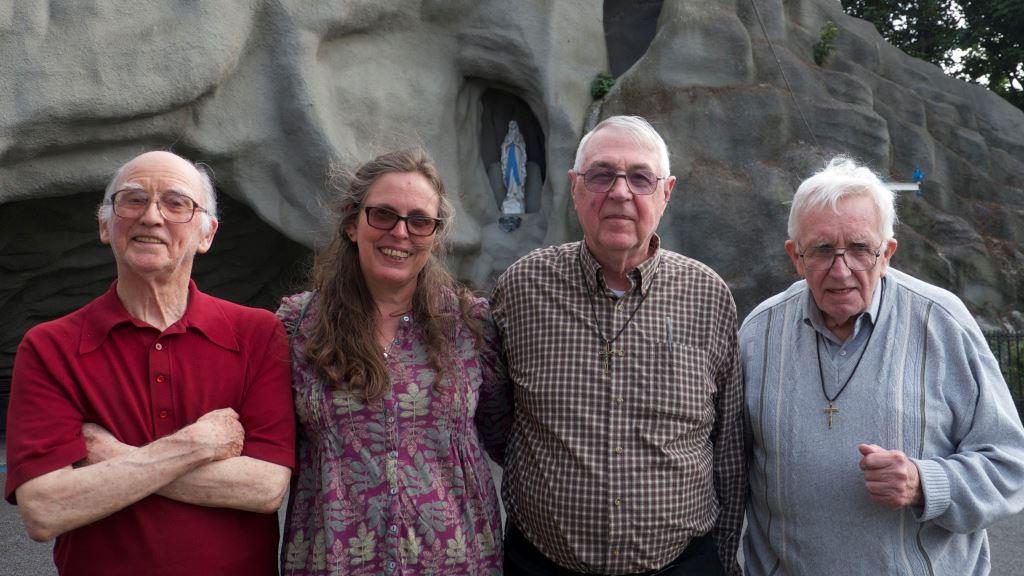 He survived cholera in Aug., 1882.  During the “1885 North West Rebellion,” at the request of the Lt. Gov. Edgar Dewdney, he dissuaded the Cree Chief, Bobtail, from joining the hostilities. There were many antagonisms with Methodist missionaries, and with Hudson Bay Company officials.

By July of 1885, his mental health had deteriorated and his behavior had become erratic.  He asked to be dispensed from his vows and become a diocesan priest.  Then in November he changed his mind and began a second novitiate in Tewksbury, MA.  That did not work out, and Bishop Grandin assigned him as a diocesan priest in Manitoba.

Suffering from chronic rheumatism and tuberculosis, Fr. Con came to the USA in Feb., 1887. He served the Native Americans of the Great Plains for ten years, on already established missions.  He then left the “Indian” missions and stayed a few months at St. Joseph’s Church, Chicago, IL.  Then he preached parish missions in New England, and Ohio, dying in St. Elizabeth Hospital, Dayton, OH, from TB, on Nov. 8, 1902.

His family is searching for more information on him.  Notably missing is the manuscript of a book he wrote Thirty Years Among the Indians of the North West. I was able to meet a grand-niece, Jacqueline Scollen, when we both visited the Oblate Retreat Center, Inchicore, Dublin, Ireland, June 5-6, 2016. Thanks to Richard Haslam, OMI, we were able there to verify some information.  Bill O’Donnell, OMI, is helping us from Rome.

Oblates in western Canada are familiar with him.  The Diocesan Archivist of Saskatoon, Margaret Sanche (nee Shannon) has been a great help. However, he seems largely forgotten by Oblates in Europe and the USA, and his place as an Oblate missiologist, unknown.

Let us recognize Fr. Con Scollen’s achievements, and give praise to God for what he accomplished.