One of the Oblate’s goals with Radio Liseli is to provide a reliable source of electricity to the station using solar power panels. This will allow them to stay on the air more consistently when the station experiences blackout or brownout of electric power.

On Saturday, after the car was fixed we were off around 10:30 am.  John and Bill had been picked up at around 9:30 as the bus drove by.  Between me calling Shalom and Fr. Freeborn we were able to have the 2 seats reserved on the bus before it left the station in Lusaka.  Cell phones have  completely changed how we are able to deal with breakdowns.  I remember in the past sleeping overnight before help came.

The trip was pretty uneventful up to Kafue Park. We ate lunch in the car with what we had packed.  As we got close to the bridge over the Kafue we were seeing Impala’s, Puku’s and some Warthogs.  The Park officials were burning the grass in the park. It was very close to the road and timed we felt extreme heat as we passed by.  They do this every year to keep the growth down. But also after the burn then green sprouts come out that are good for the grazing animals.  So we did not see elephants or Zebra’s in the area around the river on both sides where they are normally found.  So I had told the guys it just was not our day,  but as we were getting close to leaving the park we suddenly saw an Elephant right next to the road. Then we saw a giant herd of Kudu’s.  I guess the burning of the grass moved some of the bigger animals to that end of the park.  So it was a good drive. 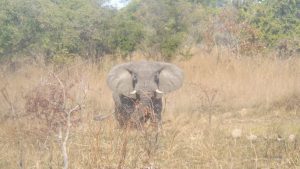 Something we saw on the way to Mongu

But as soon as we got out of the park, the road to Kaoma (if you can find it) was in a terrible shape. The worst I ever seen. The pavement would just disappear now and then and there were major potholes in the road.  We thought we were having another problem with the van.  The front wheels were extremely hot and a burnt smell would periodically be sensed by a few of us.   But the wheels cooled down and the smell disappeared, we still do not know what caused the problem, but the van has been working perfectly since.

We arrived in Kaoma, I had called Billy and John and they had taken off to Lukulu about 30 minutes before we arrived.  We had a quarter tank of Gas and I needed to at last get 10 more liters to make it to Mongu.  We went to the Puma gas station (formerly BP) on the crossroads to Kaoma.  When we pulled in it we found it closed.  They had run out of petrol and immediately we were rushed by some entrepreneurs trying to sell us petrol for twice the price.  They had them in old vegetable oil containers and what else they could use.  After taking to Fr. Gregory at the local parish, he confirmed that there was no petrol in town(the other gas station in town had closed) and that if I needed any petrol I would have pay to the price.  We went back and I negotiated a slightly lower price (not much lower , but it made me feel better) and we brought 10 liters the minimum needed to get to Mongu.  I mean the minimum. By the time we got to Mongu it was showing empty on the guage, the last few kilometers(or miles) were tense.

We arrived in Mongu at around 6:30 I found the Total gas station and filled up the Van. I did remember how to get to the Jack Joyce House (JJ House).  It was dark and everything seemed different. There were new IP roads , traffic signals that were not there before and new businesses, so nothing seemed familiar.   We called Fr. Barnabas and he met us further in town and we traveled paved roads almost to the house.  Wow!

We arrived at the house and found Fr. Chibesa (Parish Priest of Kalabo) at the house.  Fr. Barnabas and him were traveling the next day to Lusaka for meetings.  It was good to be back in Mongu where I lived for 2 years.  Inutu the great cook when I was there was still cooking at JJ House.  The food was great and it was good to catch up with Chibesa and Barnabas.

There was not enough room at JJ house for us to stay and Fr. Barnabas had booked us into a lodge ran by the Presentation Sisters on the road to Limalunga( for those who know the area it is right after the Sepo convent) It is called Liseli Lodge.  The rooms were great, but we found out in the morning that the geezers (a solar and electrical combination) were not connected to the electricity so the showers were cold.  The winter months solar is not enough to get and keep the water warm.

We had a relax Sunday.  We went to Mass at St. Agatha’s.  I wanted to go there because the Church had dedicated a picture of Our Lady of Guadalupe and thought itwould be good for Pedro and Miguel to see a little of Mexico in Zambia. I was also hoping to run into the Comboni Sisters who do ministry at the Parish.  The sisters have a multi-cultural community, with sisters from Ethiopia, Spain, Italy and Mexico.  I was lucky because one of the Ethiopian Sisters was at the Mass.  I was able to get an invite to their house at 3 pm.  We had a good visit with Sr. Marta (from Mexico) and the sisters from Ethiopia. Most of the conversation was in Spanish, which I think was good for Pedro and Miguel.  Everyone but was able to understand. Teko who speaks excellent Spanish has been the major translator for the group (Miguel knows enough english and Pedro a little less).

We went back JJ house for Dinner, then back to Liseli lodge.

I awoke to hot water which was good, but the other guys did not.   I hope they will have  tomorrow.  We went to Mass at Radio Liseli and the guys are getting the tour and being interviewed at the station.   Billy and John are coming this afternoon on the bus.  I will pick them up at the bus station.

Will post more about this tonight.  We are heading to Kalabo tomorrow, I am looking forward to seeing the new road.   It used to take up to 8 hours by boat to get to Kalabo but now only an 1 hour drive.  This will be a day trip…more to come- we post more photos as we get better internet. 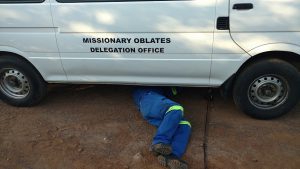 Broke down on the way to Mongu, Mechanic fixing now. Put John Wagner and Billy Fuller on Shalom bus to Kaoma. The rest of us will wait until the van is fixed.

As we were traveling through Lusaka our transmission was brutally attacked by a rock in the middle of the road.  It punctured a hole in the transmission pan and had to be welded and repaired.  However, we did not know the extent of the damage until we were about 45 minutes west of Lusaka.  We noticed trouble with the transmission, pulled over and called back to the office for help. The team then waited for repairs while Billy and I caught a bus on to Kaoma ahead of them. Bill and I will catch back up with the team on Monday when we leave Lukulu and travel 6 hours to Mongu.

We arrived late at about 7 pm and very hungry only to find out no one was at the mission to greet us…we were locked out. We finally found someone to let us in. We grabbed some delicious food instead that had been prepared just for us sitting on a table in the dining area.  We where then shortly greeted by Fr. Lazarous and had supper together. How cool is that! Eventually we settled in for the night, ready to begin the next day.

One last minor factoid; the city of Lukulu turns off the electricity at night, so at 11 pm the building went pitch dark and I had to grab a flashlight to find my way around.  So it sorta forced me to get some sleep LOL!