Originally Published by The Catholic Voice            (Used with Permission) 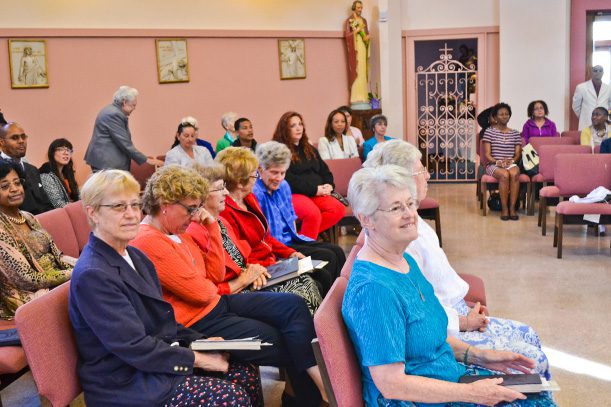 Long before he became bishop of the Oakland diocese in 1977, Emeritus Bishop John S. Cummins had memorable encounters with the CYO athletes from Oakland’s Sacred Heart Parish.

“We were from the neighboring St. Augustine Parish, small in comparison to the large community that was Sacred Heart,” recalled the second bishop of Oakland (1977 to 2003). “Thoughts of Bushrod Park come back with admiration for the Nessi’s, Crosetti’s and the Tobin’s, all large men and powerful athletes.”

A compensation, he added, was that the Sacred Heart athletes were “very much gentlemen and considerate of us who were younger.”

A “further terrible memory” recalled by the bishop was of a touch football game that was organized between Sacred Heart and St. Augustine when he was in the eighth grade. “The large Italian young man who did the kickoff not only put the ball over our heads but smacked it high against the wall of the church.”

Bishop Cummins, now 88, made those remarks June 5 at the 140th anniversary Mass at Sacred Heart Church in Oakland. He outlined the parish’s long history and acknowledged the contributions made by generations of clergy and parishioners to the local church and the community at large.

Through the ministry of Msgr. Robert Sampson (1917 to 1950) Bishop Cummins noted that Sacred Heart’s second pastor made sure the parish and school were a welcoming place. “No one was refused entrance to the school because of economic conditions.”

Msgr. Sampson welcomed the Morrill Family, who fled Mexico because of the 1920s revolution and had the Morrill children enrolled in the parish school despite their financial difficulties, Bishop Cummins said. A generation later Barbara Morrill’s work with Sister Sebastian Adza led to the formation of Family Aid to Catholic Education, also known as FACE, a scholarship program that has been beneficial to low income families.