The state of Texas inspires its residents to think big.

To honor him as a Lumen Christi finalist — as an active pastor at age 85 — seems more like a lifetime achievement award. And he’s showing no signs of slowing down. 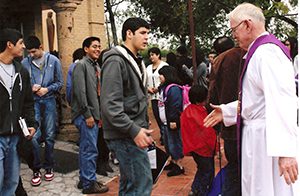 A son of Irish immigrants who was raised in San Antonio, Father Davis has had many roles, including high school teacher, football coach, college professor, missionary, social activist, chaplain and pastor. He’s worked in many countries and U.S. cities. But one of his greatest accomplishments to date is happening now — the transformation of a small inner-city mission church in Laredo into a thriving parish community.

In 2008, at age 77, Father Davis became the pastor of San Francisco Javier Mission Church. While most priests would happily retire at that age, he was eager to keep going. In fact, just before this assignment, he had been in a retirement home, healing from a car accident. He told his superior, “I need a job.” He was told there was a poor parish that nobody had been interested in taking on. “It’s perfect,” he replied.

Arriving at the church, which is “at the end of Laredo where the railroad ends,” he said, he saw the financial struggles of the area. The parishioners, primarily elderly and immigrants, face high unemployment, rising costs of living and deteriorating homes. But he also saw their spiritual longing. He felt a big sense of hope.

As a Spanish speaker, he immediately sought ways to welcome the immigrants and to develop ministries for them, including those who are transitory. He started offering three Masses on the weekends, two in Spanish and one dedicated as the children’s Mass.

Click HERE to see the rest of the article and photos