Originally Published by the Benar News, 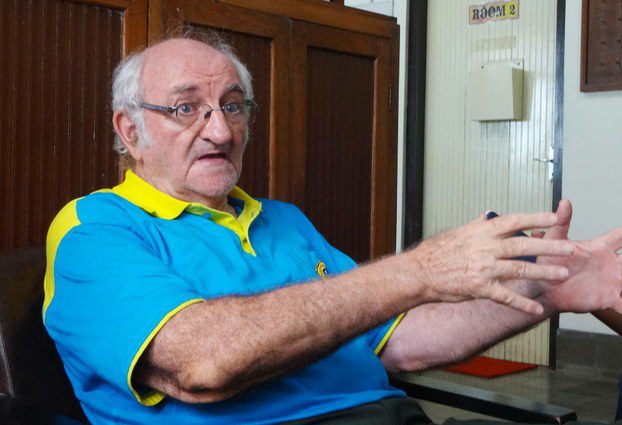 He landed in Indonesia in 1973 and has stayed on since, working to help alleviate poverty in the regency and, relatively recently, offering comfort to inmates on death row at nearby Nusakambangan prison and escorting some as they walked toward the firing lines.

Romo Carolus began by counseling Catholic inmates, but provides guidance for other inmates as well.

“I’m a Catholic, but I feel honored to counsel people from other religions,” Carolus, 73, told BenarNews.

He also opposes the death penalty and has campaigned against capital punishment in Indonesia, which still strictly enforces executions of convicted drug offenders, despite widespread criticism from aboard.

The priest shared his memory of witnessing the executions in June 2008 of two Nigerians convicted of drug trafficking.

“I still remember it clearly when they were released from the ropes tying them up. For a moment, they were groaning before they died,” he said.

That same year, the priest testified against Indonesia’s death penalty law before the Constitutional Court in Jakarta, calling executions by firing squad “torture.”

Romo Carolus – now an Indonesian citizen – urged the government to consider a more humane way of execution, if capital punishment was inevitable.

But officials have not change the policy and, since then, no religious leader has been allowed to accompany inmates and observe their executions at Nusakambangan, a prison island in Central Java.

“We were asked to leave before they were executed,” he said.

In late July, Indonesia executed four more drug convicts by firing squad at Nusakambangan, but postponed putting to death 10 others who faced capital punishment. An Indonesian, two Nigerians and a South African were lined up and shot on July 28.

While hoping that the government will change the law, Romo Carolus keeps providing counseling to inmates there who are condemned to die.

“They can’t choose how they die, but at least let them die in dignity,” he said.

The universal values that Romo Carolus expresses have left a deep impression on a Muslim cleric and long-time colleague at the prision, Hasan Makarim.

“We have known each other for a long time and we are solid working together,” Hasan told BenarNews.

When Carolus, a member of the Missionary Oblates of Mary Immaculate in Dublin, arrived in Indonesia 43 years ago, he encountered poverty in Cilacap Regency during a visit to Kampung Laut, a fishing village.

At the time, the village was known as a home for sympathizers of the banned Communist Party of Indonesia (PKI), whose membership and leadership was wiped out during a bloody anti-communist purge in 1965-66.

When he first arrived in Kampung Laut, villagers were suffering from an outbreak of eye infections. He treated them and later initiated efforts to construct a road and bridge in order to open access to the village. It then only had one small road that passed between swamps and sea.

After becoming an Indonesian citizen in 1983, Carolus set up Yayasan Sosial Bina Sejahtera, a nongovernmental organization working to eradicate poverty. The foundation has helped 25 schools – kindergarten, elementary school, junior high, high school and special-needs – in and around Cilacap.

With the love and passion of faith, he taught villagers to empower themselves by preserving fish and planting vegetables in vacant lots to improve their quality of life.

In 2012, Romo Carolus, who was assigned to St. Stephanus parish church in Cilacap, received the Maarif Award from the Maarif Institute for Culture and Humanity for his role as a local figure helping to preserve and observe universal religious values.

“He always visits the neighborhoods and listens to the public complaints by himself,” Tatto said.

Do good unto others

Carolus stresses the importance of education as the only way to reduce poverty and ignorance. God provides people with everything as long as they want to give their best, he said, adding that all people are meant to live on their own without waiting for others’ help.

Whenever there is a chance, no matter how small, he advised everyone to show good will toward others.

“Even when death is coming to you and you still have time to plant a tree, then plant it. Show generosity in every chance, even the tiniest one,” he said.