With an entirely new roof, new tower and cross, new ceiling, repainted stencils–St. John’s Chapel, Sweet Springs, WV was filled to its capacity of 130 laity, one deacon, six priests and one server for Mass at 6 pm on the Feast of the Assumption, Aug. 15, 2016. This oldest church in the Alleghany Mountains continues to demonstrate that a county without permanent presence of a priest or nun can present the Catholic faith.

We celebrated even more than two years ago (see www.omiusa.org, Return to Appalachia, Aug. 15, 2014) the pioneer Catholic feminist Letitia Preston Floyd (1779-1852). Historian Dr. Jim Glanville took my 1990 article on her, and edited it, submitting it to the history journal The Smithfield Review  and it was published in their 2015 issue (Click here). In that same issue, he himself co-authored with Ryan Mays “A Sketch of Letitia Preston Floyd and Some of Her Letters” (Click here) (19:77-120) and by himself “Governor John Floyd, Letitia Preston Floyd and the Catholic Church” (19:121-36): (Click here).  As he did in 2014, former Episcopalian priest and now RC priest Jim Conyers asked me to preach the homily, and LP Floyd was a major part of it: (Click here). 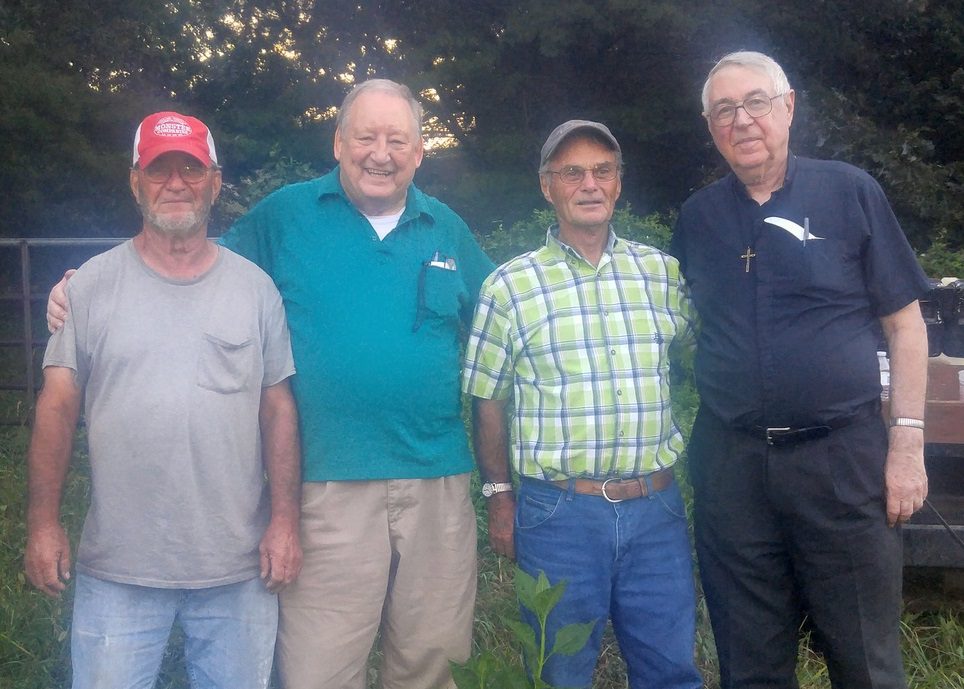 Dr. Glanville has found the famous 1852 letter of Letitia’s son, Benjamin Rush Floyd, defending his right as a Catholic to run for public office in Virginia, when  a politician told him that Catholics were unfit for public office:  (Click here).

Dr. Glanville and I began in Blacksburg, VA, on Saturday, Aug. 13, publicizing Letitia Floyd in two ways.  First was a meet and greet luncheon at Smithfield Plantation, where Mrs. Floyd was born and raised. Ten people very interested in Mrs. Floyd joined us for the lunch furnished by Dr. Glanville.  At 4 pm, 10 people came to the Alexander Black House for our presentation on her.  Dr. Peter Wallenstein, professor of history at Virginia Tech University, attended the luncheon, and we will see him below for his great interest in a marker to two slaves, in the Lewis Family Cemetery in Sweet Springs. For the importance of this cemetery, and the Catholic cemetery adjoining, see Dr. Glanville’s remarkable website www.lynnside.org., and its table of Contents.

The last direct descendant of Gov. and Mrs. Floyd to live on the property, Lynn Spellman, died on May 15. She owned St. John’s Chapel until 1977, when she asked the surprised bishop of Wheeling, Joseph Hodges, what he wanted done with it, since it had been unused for almost 20 years.  He asked her for it, and she immediately gave it to him, and with the bishop’s encouragement, Fr. Jim MacGee, OMI, supervised its renovation.  Mass was celebrated every Saturday evening until about 1984. 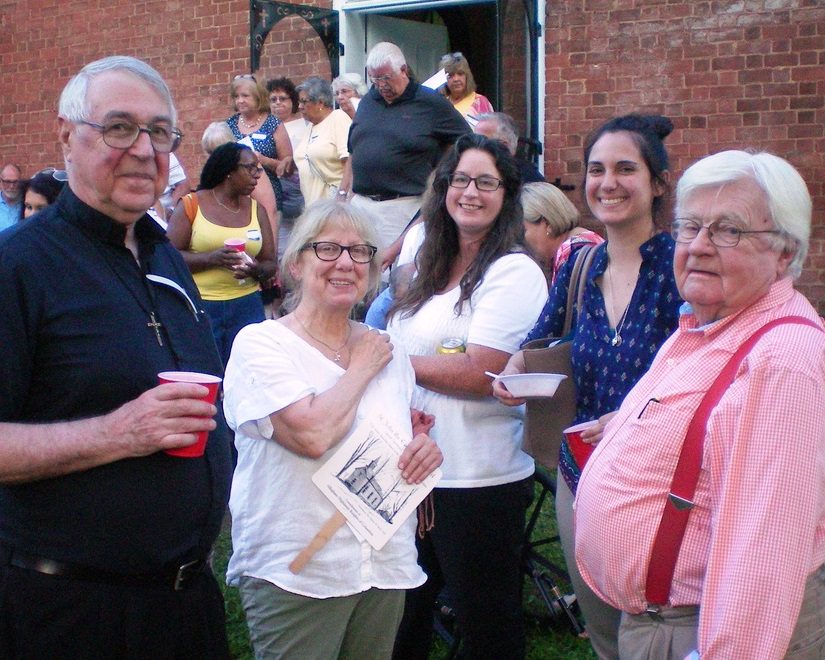 Now Bishop Michael Bransfield only allows Mass in the county once a year. Mrs. Spellman sold the family plantation across the road, to a German-American developer, Roland Oelschlager, who discourages access to the historic cemeteries because of liability issues.  Fortunately, the two local brothers who supervise the opening of the locked gate came to the ice cream social after the Mass.  They gladly took Dr. Glanville, April Danner, Director of Smithfield, and myself up to the cemeteries.  Mrs. Danner wanted to see the graves of Governor John Floyd and Letitia Preston Floyd. Dr. Glanville and I wanted to pay our respects at Lynn Spellman’s grave.  He  also wanted  very much to photograph the remarkable slate brown three foot monument “Faithful Slaves–Tom & Dinah–A.D. 1800,” which is less than ten feet from the graves of their owners, William Lewis and his wife, Ann Montgomery (Click here).  He is sure that Dr. Wallenstein will visit this marker. (Wallenstein has won many awards for his specializations in race, civil rights, and Virginia history).  Glanville believes there are only a handful of such monuments in the entire country.

Monroe County’s population is increasing yearly.  Those attending the Aug. 15 Mass are grateful for the opportunity to celebrate Mass in the beautiful Sweet Springs Valley.  About 15 more of the Oblate Associates/St. Eugene Patron of Dysfunctional Families folders were distributed, as was done 2 years ago.

However, the Catholics of Monroe County  are also torn by the neglect of the diocese, with no Mass close by for the rest of the year.