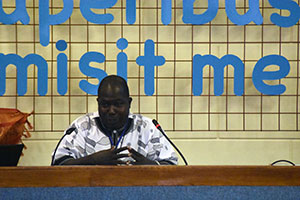 After Morning Prayer prepared by the Region of Europe, the Chapter began the important phase of listening to various reports. These reports are meant to show not only what is happening in the Oblate world, but to help us look back with gratitude at the many ways that God has blessed the Congregation.

First on the agenda was the report of the Region of Africa-Madagascar. The president of the Region, Fr. Edouard DAGAVOUNANSOU (Cameroon) presented the report which he entitled: “Continent of Hope.” He stated at the end of his presentation that the Region of Africa-Madagascar wishes to make a gift to the Superior General — the services of young Oblates for the mission throughout the world at the time of their first obedience. In the question and answer session after the report, there was considerable focus on the issue of collaboration in and financing of formation as well as financing of the works of the mission. 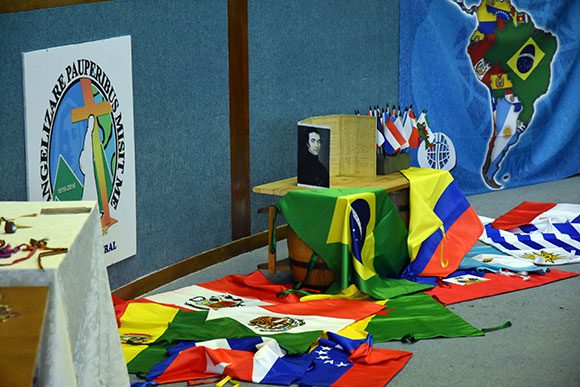 The Region of Latin America’s report was offered by Jose Ariel MARTINEZ (Mexico) and Jorge ALBERGATI (Uruguay). The Region is geographically vast, a factor which makes the needed restructuring difficult to achieve. Immigration also poses major challenges in the Region, not only as people leave their homelands to try to find a better life but there is also migration within the countries themselves.

Fr. Lauro DE GUIA (Philippines) presented the Asia-Oceania Region’s report. This too is a very diverse region with many cultures but a long history of Oblate presence. The questions and 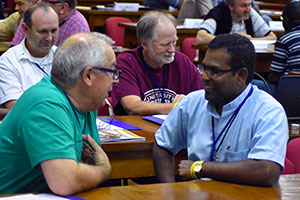 comments focused very much on interreligious dialogue and the problems inherent in carrying on the mission in the midst of Islamic fundamentalism. It was very moving to hear Fr. Lauro talk about the Oblates and other religious working in the southern island of Jolo who cannot go out of their houses without two marine guards as escorts. “But we cannot leave our people!” he said.

Both Fr. William ANTONE (United States) and Fr. Luc TARDIF (Notre-Dame-du-Cap) presented a video that focused on gratitude for past and present missionary challenges and accomplishments in the vast Canada-US Region. It was exactly 175 years ago that St. Eugene de Mazenod sent six Oblates to North America. The Oblates in the Region are aging and there are few younger Oblates to carry on traditional ministries. As Fr. Luc put it, “We live in constant mourning as we leave long-established ministries.” But there is a very concerted effort in vocation recruitment and the Region has received from other Units some very dedicated young missionaries. 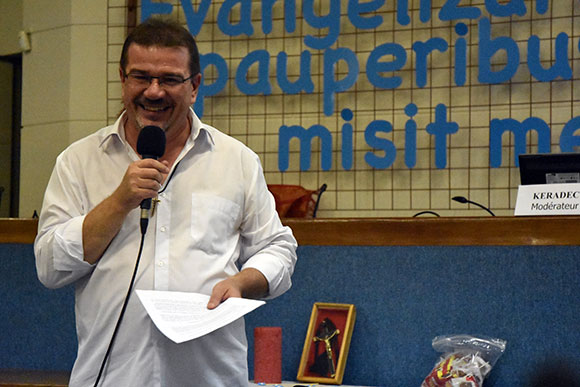 After supper, the capitulars were invited to listen to a presentation by the superior of the International Eugene de Mazenod Centre in Aix, Fr. Christoph ZIELENDA. He spoke about the programs offered at the Centre which is, in reality, the cradle of our Congregation.