(Editor’s Note: The articles below follow the developments of each day of the General Chapter in Rome. Please scroll down to see news from the first seven days of the Meeting. (Editor’s Note: There is no Report for “DAY FIVE” as it was a free day for the Chapter)

All of these daily reports were originally Published on OMIWORLD.ORG

In a sure sign that the electronic age is upon us, the opening session of the 36th General Chapter was electronically streamed live to the computers of Oblates throughout the world. Fr. Louis LOUGEN, the Superior General, officially opened the General Chapter on 14 September 2016 at the Casa LaSalle in Rome. This is a “Jubilee Chapter” in two senses: the Oblates of Mary Immaculate are celebrating the 200th anniversary of their founding; and it is taking place during the extraordinary Jubilee of Mercy for the universal Church.

Prior to the official inauguration of the Chapter, the 82 members of the Chapter and the 38 priests, Brothers and scholastics who are serving as Auxiliary Personnel, gathered with Oblates from various communities around Rome and with invited guests to celebrate Eucharist and call down the blessings of the Holy Spirit on the assembly. “The General Chapter is the highest authority within the Congregation. It meets regularly to strengthen the bonds of unity and to express the members’ participation in the life and mission of the Congregation. United around Christ, the Oblate family shares the lived experience of its communities as well as the challenges and hopes of its ministry. The Chapter is a privileged time of community reflection and conversion.” (OMI Constitution 125) 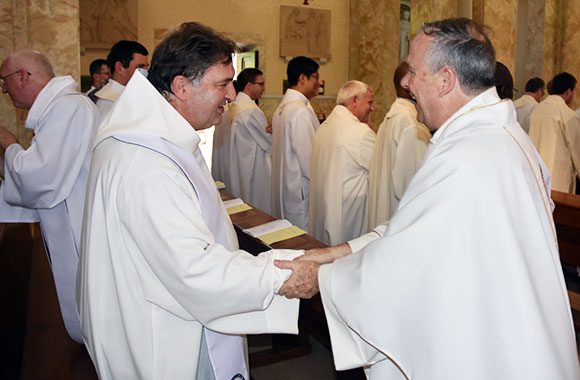 The Chapter began with the liturgical celebration of the Exaltation of the Cross of Jesus. In his homily, Father General invited the Oblates “…to ask God for the gift of faith as we open this General Chapter, the Chapter of our jubilee. We come here, first of all, as men of faith, and this means men who have vision, who see deeply what is not evident and who possess wisdom. We believe that Jesus brought us here as his missionaries. He desires to breathe the newness and power of the Spirit on us, this special body of Oblates called the General Chapter.” 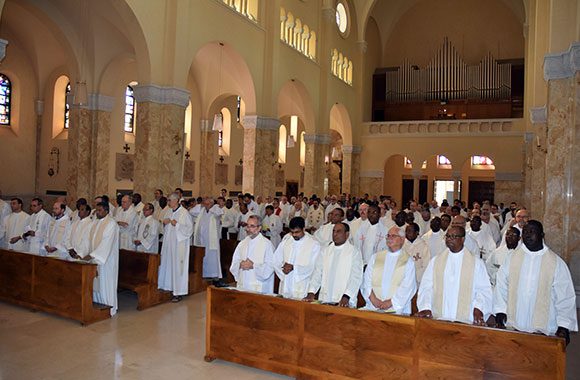 He further stated: “This is not just another meeting, one more General Chapter. We cannot be here wondering ‘will this Chapter be useful!’ We know the Spirit of Jesus is among us and will speak to us. WE have to make the General Chapter an event that will touch the Congregation!” 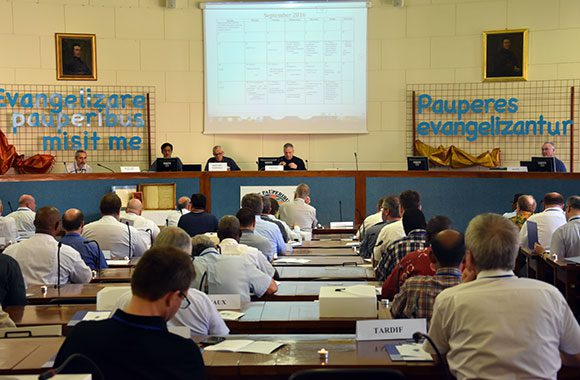 Following the liturgy, the capitulars chanted the Litany of the Saints as they went in procession from the chapel to the meeting room. Once there, the traditional “Veni Creator Spiritus” was intoned. Fr. Claudio BERTUCCIO, the Commissioner who led Chapter preparations took roll call. One capitular had not yet arrived because of issues with his visa. Fr. Christian FINI is serving as substitute for the provincial of Australia who was not able to fly to Rome at this time because of a health issue.

As the Chapter began, Fr. General announced the sad news that Fr. Kennedy KATONGO, the Director of the Oblate JPIC Service, had been found dead of an apparent heart attack at the General House. The Chapter members offered prayers for his eternal rest.

In the afternoon session, the capitulars broke into small groups to get to know one another better.