All of these articles originally Published on OMIWORLD.ORG

CLICK HERE to Re-Visit All the News from WEEK ONE

Morning Prayer included a procession from the main chapel to the aula; it opened the second full week of the 36th General Chapter. Oblates from the Region of Africa-Madagascar came into the aula with rhythmic dance and carrying a small tree as a symbol of Africa, “the cradle of life.” The tree is a symbol of the rich history of the Oblates in Africa which continues to branch out in order to show the way to the poor of our times.

The chairman of the Steering Committee, Fr. Luc TARDIF, explained how it is a day of transition, from looking at our past with gratitude through the reports of the previous week, to beginning to

chart our future. He quoted Oblate Constitution 126 that states that a Chapter “articulates our missionary vision, determines general policy for the Congregation, and makes whatever decisions are required.”

To begin that process of articulating that missionary vision, representatives of each of the five regions were invited to convey what the regional capitulars see as the three most important issues to be considered during the Chapter. Afterwards, the floor was open for the identification of convergences that appear from those reports.

Each week, one of the capitulars gives a spiritual conference to help the capitulars sharpen their focus on the Gospel values that underlie their discussions, discernment and decisions. Today, Fr. Rohan SILVA, the provincial of the Colombo Province in Sri Lanka, based his words on the Oblate charism as found in our Constitutions and Rules; on the Holy Father’s letter to religious at the beginning of the Year of Consecrated Life (November 2014 – February 2016); and his Apostolic Exhortation, The Joy of the Gospel (2013). The parable of the Good Samaritan served as the principal scripture background to the talk. Afterwards, the capitulars were given the rest of the morning for personal reflection. 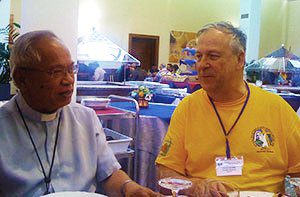 The capitulars warmly welcomed a special guest for lunch, the Archbishop of Cotabato in the Philippines, our Oblate Cardinal Orlando QUEVEDO, who had come to Rome to participate in the World Day of Prayer for Peace in Assisi on 20 September.

During the afternoon plenary session, several capitulars gave brief reports. Fr. Vlastimil KADLEC, Bro. Jason ROSSIGNOL and Fr. Christian FINI spoke about the Congress on the Mission with Youth that took place in Aix in March 2016.

Frs. Cornelius NGOKA, Hipólito OLEA and Bonga MAJOLA told the capitulars about the Congress on Oblate Vocations, also held in Aix in July 2016.

The beatification of the Martyrs of Laos was the topic of a presentation by Fr. Vincent GRUBER, Provincial of France, and Fr. Alberto GNEMMI, Provincial of the Mediterranean Province. They spoke not only of the 17 martyrs themselves but also of the special Oblate celebrations that will take place in France and Italy. The beatification ceremony will be on 11 December 2016 in Vientiane, Laos. The Holy Father has designated Oblate Cardinal Quevedo as his personal delegate for the ceremony.

Two members of the Steering Committee explained the proposed program for the next several days: a focus on the Chapter’s theme of Mission. Frs. Luc TARDIF and Pawel ZAJAC announced that the capitulars will be invited to sign up for one of six working groups that will study various aspects of the theme with a view to making some concrete proposals for the Chapter to consider as part of our “missionary vision.”

1) The new faces of poverty.

2) The mission with youth.

3) Formation for the mission.

4) The mission and Interculturality.

5) The mission and social media.

6) The mission and finances.

There was a lengthy discussion on the choice of topics and how other themes of importance might be dealt in conjunction with the discussions of the six designated elements. In the end, the capitulars accepted the Steering Committee’s proposal and agreed to move forward into this new phase of the Chapter to articulate our missionary vision and determine general policy for the Congregation.

Click Here to see the Chapter Update from DAY NINE