Scholastics from Karachi, Pakistan, prayed with the capitulars today and provided the material for the Morning Prayer. Also, prior to the morning session, Fr. Pierre-Olivier TREMBLAY (Notre-Dame-du-Cap Province) gave a brief spiritual conference on “Chastity and the Mission of Charity.”

Since electing leadership for the Congregation is one of the duties of a General Chapter, the capitulars approved the slate of candidates for the Nominating Committee:

The last of the six focus groups on the Chapter theme, “Mission,” made their presentations during the plenary sessions of this day. “Mission and Social Media” and “Mission and Finances.” As always, there were comments and suggestions from the capitulars to help the focus groups finalize their documents. 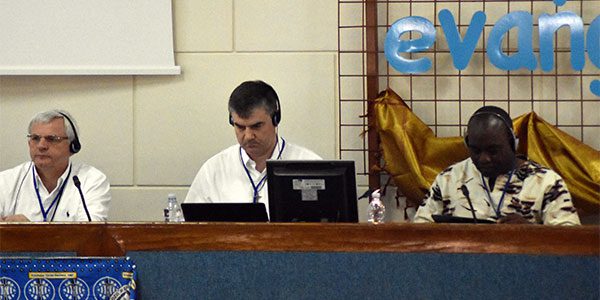 In the afternoon, the chairman of the Steering Committee, Fr. Luc TARDIF, introduced the process of nominations and elections. This process will be proposed on Wednesday for the approval of the Chapter. Of course, it will include prayer and discernment. The entire Oblate family is asked to unite in prayer on Thursday, 29 September, asking the Holy Spirit’s guidance for the Chapter.

The plenary sessions ended with further discussion and amendments to proposals for changes in the Constitutions and Rules.