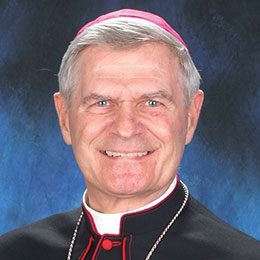 Pope Francis has named Bishop Paul Dennis Etienne, 57, the next archbishop of Anchorage, Alaska. This announcement comes after the Pope accepted the resignation of Archbishop Roger Schwietz, OMI  76, who submitted his resignation last year upon turning 75 as required by the Church’s canon law.

Archbishop-elect Etienne has served as the bishop of Cheyenne Wyoming for the past eight years.

The new appointment was announced at noon in Rome on Oct. 4. Archbishop Schwietz will introduce Archbishop-elect Etienne at an 11 a.m. on Tuesday morning, Oct. 4.

The installation date for Archbishop-elect Etienne is yet to be announced, but Archbishop Schwietz will serve as apostolic administrator during the interim.

Looking forward to retirement, Archbishop Schwietz said, “After November 9 I will remain here in Anchorage to care for one of our larger parishes as pastor, Saint Andrew parish in Eagle River. I am excited about the new possibilities in retirement. The Archbishop elect has asked me to remain here and be of assistance as long as my health is good. I am happy to do that since  Alaska has become my home.”

Archbishop Schwietz was born in St. Paul, Minnesota on July 3, 1940. A member of the Missionary Oblates of Mary Immaculate since his first profession of vows on August 15, 1961, he was ordained to the priesthood in Rome on December 20, 1967. He was ordained Bishop of Duluth at the Cathedral of Our Lady of the Rosary on February 2, 1990, and assumed responsibility as Archbishop of Anchorage on March 3, 2001.

Archbishop Schwietz spent his first seven years as an OMI priest working with seminarians for the Oblates. He then served as associate pastor of St. Thomas Aquinas Parish in International Falls, Minnesota from 1975-1978.  In 1978, Archbishop Schwietz was named Director of the College Seminary Program for the Oblates of Mary Immaculate at Creighton University in Omaha, Nebraska. Six years later, in 1984, he became pastor of Holy Family Parish in Duluth, Minnesota, after which he was appointed by Pope John Paul II as the seventh Bishop of Duluth on December 12, 1989. On January 18, 2000, he was appointed the Coadjutor Archbishop of the Archdiocese of Anchorage and succeeded to the See on March 3, 2001.

Since being named a bishop, Archbishop Schwietz has held a number of positions within the United States Conference of Catholic Bishops (USCCB). He most recently served as Chair of one of the five “super committees” at the USCCB overseeing Laity, Marriage, Family Life and Youth. In that role, he served as the liaison between the National Advisory Council to the United States Bishops and the USCCB.

Archbishop Schwietz holds emeritus status with the Teens Encounter Christ (TEC) movement, a program that encourages young adults to learn about and be challenged by their faith. He served, from 1991 until 2009, as the Episcopal Moderator for TEC.  Over the years he has witnessed lives changed and vocations develop as a result of the three day TEC weekend.

In his free time, Archbishop Schwietz takes full advantage of the unique opportunities to experience nature that life in Alaska offers. He cross country skis in the winter and fills his freezer in the summer and fall by fishing and occasionally hunting.