In 8 August 2016, a terrorist bomb killed at least 70 people and injured 130 more in a hospital in Quetta, Pakistan. On 25 October 2016, at least 59 cadets and guards were killed in an attack by militants on a police college in that same city. The Vicar Apostolic of Quetta is an Oblate of Mary Immaculate, Bishop Victor GNANAPRAGASAM.

On 28 October, the Vatican news bureau, Fides, made the following report: 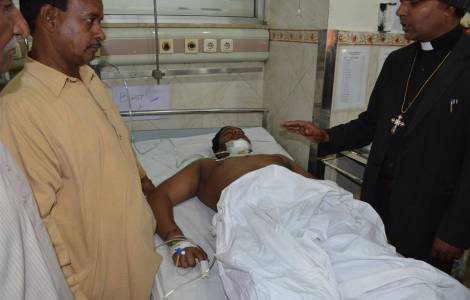 Christian and Islamic religious leaders who intervened to resolve a case of alleged blasphemy in Quetta, the Pakistani province of Baluchistan played a decisive role regarding two Christians. As Fr. Renald REMINDRAN, Missionary Oblate of Mary Immaculate in Quetta, reports to Fides, a nine-year-old Christian boy named Izhan and his mother Shakeela Kauser, a nurse at the Civil Hospital in Quetta and mother of three children, were stopped and questioned on charges of blasphemy: they were accused of having burned pages of the Koran on 20 October.

After the complaint, the police stopped them. In this instance some local Christian leaders got the leaders of the Jamiat Ulema-e-Islam organization involved, who played a key role to exonerate the two of all charges. The matter was resolved on October 21, and accusations of blasphemy were declared void, “We are delighted with this outcome. It is significant. In the province of Baluchistan no one so far has been charged and convicted for blasphemy”, said Fr. Remindran to Fides. In a note sent to Fides, Anjum James Paul, President of the Pakistan Minorities Teachers’ Association, appreciated the role of political and religious leaders, Muslims and Christians, to ascertain the truth and prevent any conflict between the two communities.