Diana Prince is a longtime benefactor of the Missionary Oblates.  Occasionally she travels to Oblate missions to gain a firsthand understanding of how the Oblates are improving the lives of the world’s poor.  Here she reports from a recent trip to Madagascar. 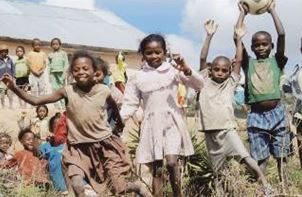 I want to speak a few moments about the poverty in Madagascar, only because it is a reality, and not in any way to discredit this very remarkable country whose people are decent and hardworking.

In Antananarivo, the biggest city and capital, there are believed by some estimates to be 50,000 homeless children.  In the streets, mothers as young as 12 approach begging for food for the babies they are carrying on their backs.  Children are playing amid garbage heaps.  Adults rummage through garbage hoping to find something of value that might have been discarded unknowingly.

There is also rural poverty.  I remember riding through some regions in the south of Madagascar where fresh, drinkable water was in low supply, and children would come to the edge of the road signaling that they were thirsty, and asking, not for money, but asking for water.  In remote regions, the people work daily to attend to the rice paddies.  They use the traditional zebu, a large ox-like animal, to do difficult work.  Even children carry heavy loads by cart, or balance items on their heads, to help out their families.

The bright side in this picture is the Oblates are dealing with these problems of the homeless and the jobless.

In Fianarantsoa, the Oblates have a formation house for new priests and brothers to prepare them for their work with the people.  At the time I visited, 17 young Oblates were in training, and three priests were at the formation house.  Two priests also work in the local parish.

The young seminarians study Philosophy and Theology in the formation house for three years.  They then spend a year training in specific mission or parish work.  Some of these future priests teach catechism or do other pastoral work at St. Eugene De Mazenod Parish.  After completing this hands-on work, they continue another three years studying Theology.

Five local villages also provide opportunities for pastoral training in addition to the academic requirements.  Also, some of the local seminarians will be sent elsewhere for further training, such as four students recently sent to Cameroon, and others to Rome and Holland.

In Antananarivo, Fr. Szul Adam, O.M.I. discussed the work of the Oblates in this large city.  Originally hoping to open more parishes here, the Oblates were asked rather to established parishes in the countryside where the need is greatest.  The initial facility at Antananarivo was opened in 1980.  In 1992 the new building was opened.

Five priests in this location sometimes cover 31 small village parishes which do not have full-time priests.  The five missions that are primarily staffed by the oblates are the missions at Marolambo, Ambinanindrano, Mahanoro, Masomeloka and Notre Dame of Lourdes.  This underscores the great need for priests in a region where challenges are constant.

The Oblates respond to the requests from a number of sources.  What was originally pastoral work, focused on education and teaching, has expanded to those needs that have come from the communities, in particular, the villages in the countryside.  Their mission work now includes working with the mentally disabled, physically handicapped, youth groups and management of schools.  Hospital work is also an area of Oblate work in Madagascar.  As Fr. Adam points out, “We respond to those who request our involvement.  Our goal is to work where the need is greatest.”