While it is not rare that some Oblate missionaries eventually assume citizenship in the country where they are preaching the Good News, Fr. Vincenzo BORDO, a native of Italy, speaks eloquently here of his own feelings as he assumed a new “identity” and a new name as a citizen of Korea.

The great dream of a missionary is to go to a far-off country, to live as the people live, to speak their language, to dress as they do, to eat the same food, to study and to appreciate their culture, and with humility and dedication, to serve the poor in that nation. To become like them and to become one of them. And then to rest in peace in that corner of the world.

Looking back at my life, on the threshold of turning 60, I think I can say that, thanks to Jesus, so many of these dreams have come true. I live in a country that I love and appreciate and I work for the poor. I speak their language; I share the same meals; I dress like them. And perhaps because of this, the Government, seeing this sincere, long and arduous journey of sharing, decided, by a presidential decree, to honor me with Korean citizenship. During the ceremony of handing over the passport, after I made the oath of allegiance to the Republic, when the Minister handed me the flag of Korea, sweet tears of joy fell from my eyes. Yes, now I am in fact a Korean citizen. My dream has come true. 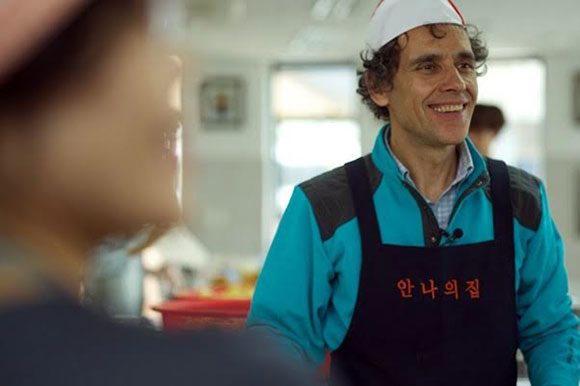 So, when you come here and you wish to see me, do not look for Vincenzo Bordo, because this person is no longer in the Korean registry. Instead, look for KIM HA JONG. In the documents, this is my new name. “Kim” is the surname of the first Korean priest. He was a wonderful young man, in love with life, with God and with his people. He died a martyr when only 24 years old! “Ha Jong” means “Servant of God. Yes, following in the footsteps of Jesus, I learned to choose the poor and to be a servant of these destitute brothers and sisters. So that little dream of a young boy has turned into a beautiful mission of brotherhood and friendship between two peoples: Italy and Korea. They are nations that were able to meet one another, to get to know and esteem one another in the richness of their ancient cultures, thanks to that tiny, fragile and wobbly bamboo bridge that I too helped build. 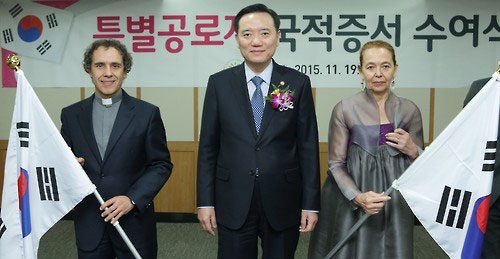 Father Vincenzo Bordo (left) after the ceremony of handing over the certificate of Korean nationality on 19 November 2015.

Over these years I have also learned that the fears of the new are simply excuses to mask our petty selfishness, hidden behind legitimate claims of security. That the mistrust of others is just a phantom, due to stupid ignorance and the presumptuous arrogance of those who have nothing to learn.

Meanwhile, I have realized that a life of welcoming, listening, sharing and of dialogue leads to broaden the mind to new and wonderful knowledge; the spirit to infinite horizons and it opens our hearts to incredible sensations never before felt. That which is different is not a threat but rather an unfathomable richness.

Now I’m getting ready to fashion the last piece of this great mosaic that has been my life in the Orient: to rest in peace among the rolling hills and beautiful forests of this nation. And to do that, I have enrolled as an organ donor. That will be, whenever God wishes, the last piece of the enchanting DREAM which the Lord has made in this corner of the world. (Fr. Kim Ha Jong Vincenzo)