From the Missionary Oblates of Mary Immaculate JPIC Blog 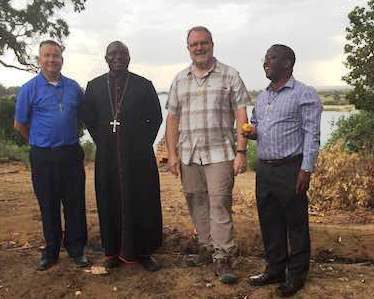 In the words of Pope Francis, it is said, ‘Each year sees the disappearance of thousands of plant and animal species which we will never know, which our children will never see, because they have been lost forever. The great majority become extinct for reason related to human activity’( LS 33).  Another environmental issue in our locality is the annual fish ban which government imposes from December to March. In the midst of this fish ban we are surprised to ding fishermen continuing to catch fish. Not only do they continue fishing, but they employ weird ways of catching fish using mosquito nets. This is a very bad habit which should stop. What will happen to our future generations? In Laudato Si, we are told, ‘We are not God. The earth was here before us and it has been given to us… Each community can take from the bounty of the earth whatever it needs for subsistence, but it also has the duty to protect the earth and to ensure its fruitfulness for coming generations’ (Pope Francis, LS67).

Banabahesu, we begin Advent Season. The Church during this liturgical Season calls and invites us to be vigilant. Those who grew up in the previous republics will be familiar with what used to be called Vigilantes. This group of people was bent on being the eyes and mouths of government. They reported anyone who had a different voice in the community other than the voice of the ruling party. In some cases they even arrested those they suspected of being enemies of the community or the party. They were alert and vigilant to what was happening around them.  Well, this reflection is not a judgment about the bad or the good things the Vigilantes did in our communities.  It is about our vigilance as to what is around us during this Advent Season. A spirituality of vigilance leads us to be aware of who is to come, Emmanuel, God With Us. As we begin Advent, we ought to ask ourselves if we are vigilant in our dealing with the environment? Are we aware that the environment is ours to safeguard and responsibly manage; and not for us to abuse? During this Advent Season, and as we reflect on the themes of being alert, and of being vigilant what steps should each one of us take in order to be good stewards of our environment?

Indeed the spirit of Advent is that of vigilance. Our vigilance should lead us to a change of heart in doing what is good. In the Diocese of Mongu, Advent Season calls for a change of heart in the way we take deal with our environment. Is this not the time for our caterpillar collectors to change their hearts and find better ways of collecting and harvesting caterpillars? Speaking to on 27thSeptember 2008, Pope Benedict XVI said, ‘The resources of creation are an immense gift of God to humanity. Humanity is duty-bound to protect this treasure and to counter the indiscriminate use of the earth’s goods.’ Is the protecting of the earth not our responsibility? Banabahesu, if we all take time to act on behalf of our environment, Advent Season will be a good experience for all of us. A change of heart is also needed in the way our fishermen do their fish business. Our fishermen must adhere to mandatory fishing cycle at the same time using recommended fishing gears and methods. In fact the spirit of Advent is that of adhering to the Word as announced in our hearing. It is about preparing the way in order to receive the Word that is coming to us. Adhering to good environmental practices

Banabahesu, an attitude of spiritual vigilance and a change of heart will be evidence of Christ at work in our lives. When we do this we shall not only await and prepare for the Messiah who is to come for us, but we shall be taking measures to safeguard what God, the Father of the Messiah whom we await gave to humankind.

Banabahesu, may Mary accompany us in our Advent Season. Mary Our Mother was vigilant and alert to the Words of God as proclaimed by Angel Gabriel. By so doing she accepted to be part of the story of human salvation. Let each one of us emulate Mary in her vigilance and alertness to the Word of God. This is a blessing I wish each one of us during this Advent Season.