By Fr. Roland JACQUES, OMI Vice-Postulator, was an eye-witness to a beautiful event in the life of the Church in Laos and in the history of the Missionary Oblates of Mary Immaculate.

In Vientiane, Laos, on Sunday morning, 11 December 2016, the third Sunday of Advent, there was only one Mass celebrated in all of Laos. The Church of the Sacred Heart, the pro-cathedral and the only place of worship in the capital, Vientiane, seemed very tiny as the faithful, coming from all directions, filled the 400 places inside the building and then took over every space available all around it – in the courtyard of a school – and then in the neighboring streets. Big tents had been set up to allow the crowds to gather, protected from the burning sun. As they arrived, each one received gifts – flowers, images and medals of the martyrs. An atmosphere of peace, joy and reflection permeated from the very beginning of the festival, which began with the traditional procession of Christ the King in the nearby streets. 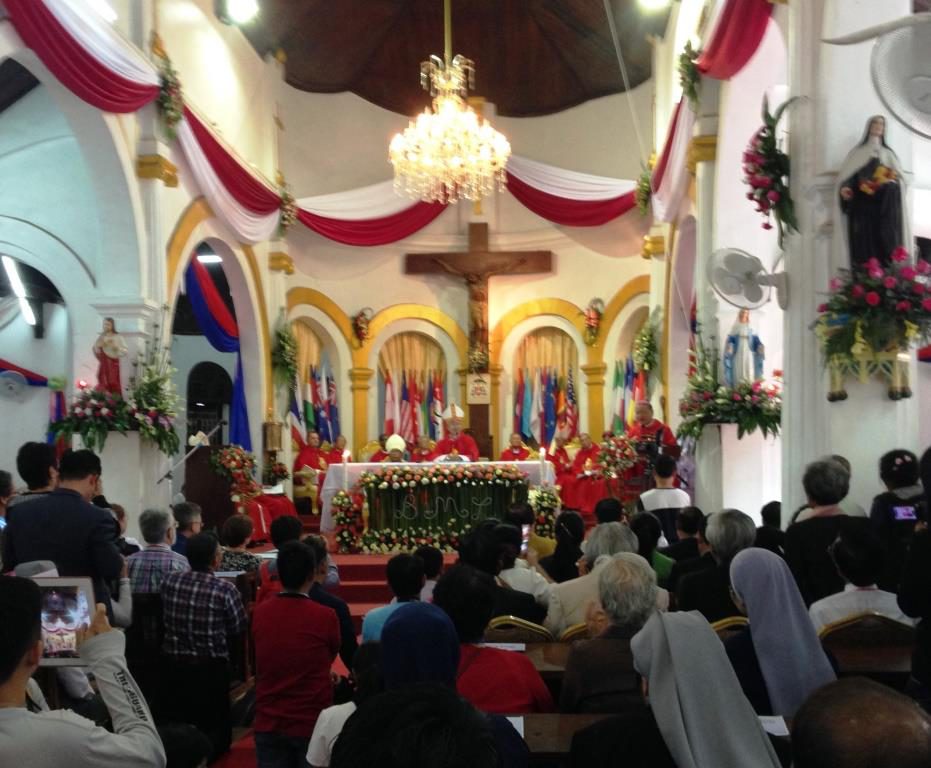 Cardinal Quevedo at the front of the packed Church

The Catholic Church in Laos is very small, humble, almost hidden. There are only 4 bishops, 21 Lao priests and deacons, a few dozen nuns, and just under 50,000 lay faithful. Its story is not well-known. Once planted with the sweat and blood of three generations of missionaries, today it can rely only on its own forces, supported only by a handful of priests from Vietnam or Thailand. That goes to show to what extent the event of this day was unique, unheard of for this small country and for this very young Church. 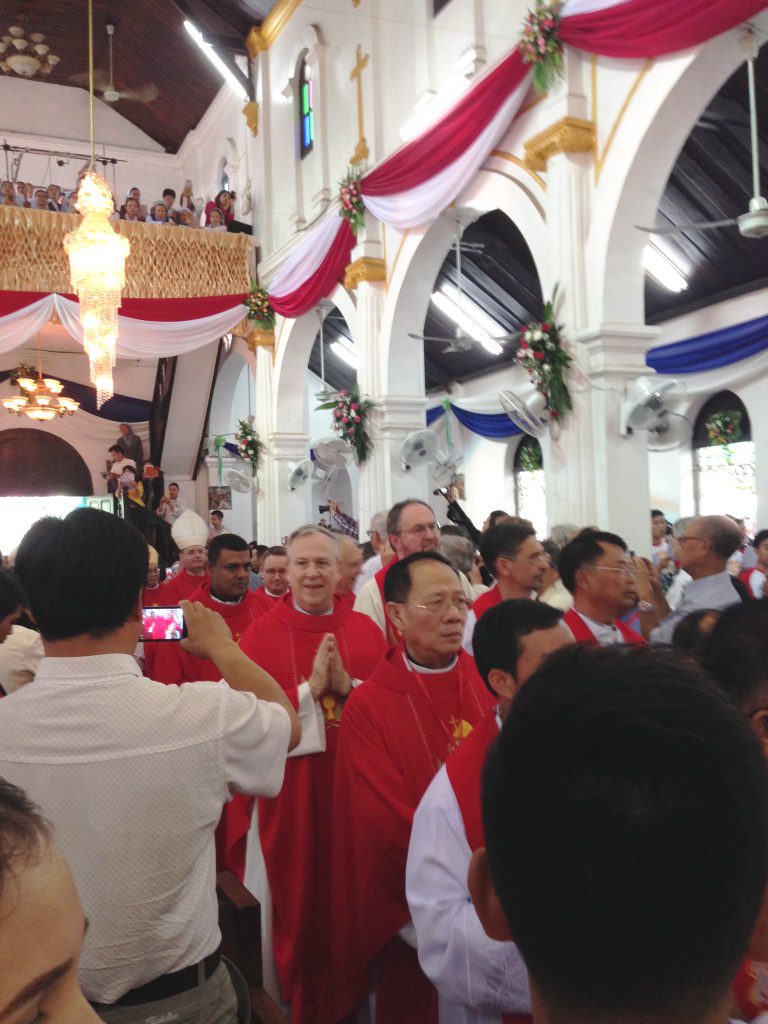 Pope Francis had sent Cardinal Orlando QUEVEDO, who had come from Mindanao in the Philippines; He is a man as humble and close to the little ones as the person he represented here. With him were 15 other bishops – from Laos and Cambodia, Thailand and Vietnam — the Superiors General of the Foreign Missions of Paris, the Missionary Oblates of Mary Immaculate and the Voluntas Dei Institute, and more than 150 priests, of which a large number came from Vietnam and Thailand; those coming from western countries were only a tiny handful. The faithful were more than 6,000, besting the most optimistic expectations of 3 to 4,000 participants.

In the first rows of the assembly were representatives of the government and delegates of religions recognized in Laos, including Protestants and Muslims. There were also the Ambassadors of France and Germany and some other diplomats. Then there were the families and relatives of some of the martyrs who came from distant parts of Laos or France. Among these close relatives, there was Archbishop Tito Banchong, nephew of the catechist Thoj Xyooj; Bishop Louis-Marie Ling, the only survivor of the attack which cost the life of his cousin, the catechist Luc Sy; Father Yvon L’HENORET, cousin of Vincent L’HENORET and also a missionary in Laos; the nieces of Noel Tenaud and Marcel Denis, m.e.p. In such an assembly, one can understand how much emotion there was. But there were also other issues, much more important than nostalgia or looking back.

In the middle of the celebration, Cardinal Quevedo read the Apostolic Letter of Pope Francis declaring “Blessed” the 17 martyrs, and fixing their feast on December 16th. This short text highlights the fidelity of these “heroic witnesses of the Lord Jesus Christ and his gospel of peace, justice and reconciliation, at the cost of their lives.” In his homily, the representative of the Pope, commenting on the life and death of Father Joseph Tien and several others, repeated this theme at length. 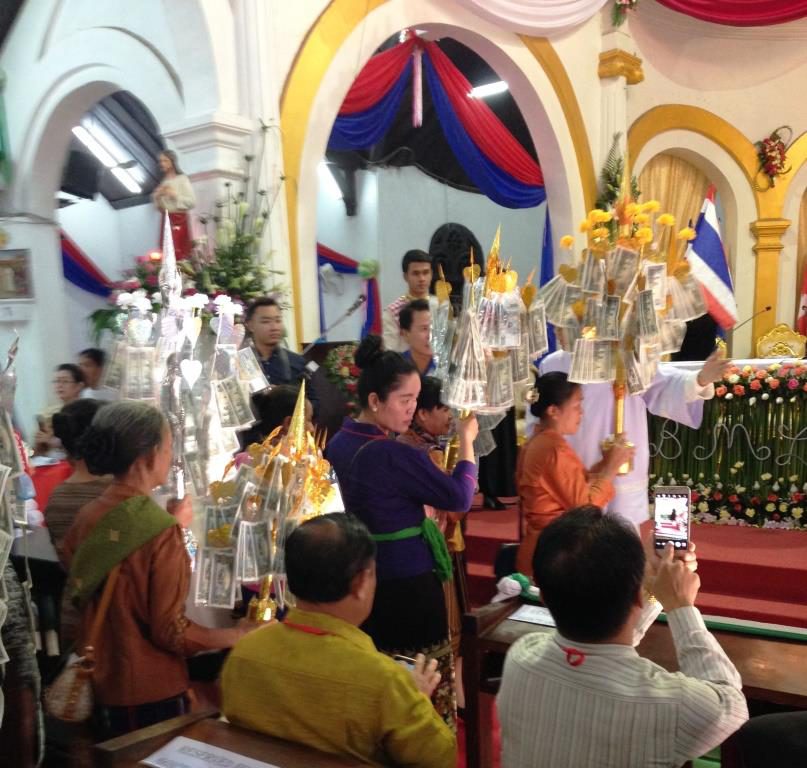 At the end of the celebration, to the great astonishment of the assembly, the Deputy Director of the Lao Front for the Building of the Nation, a state agency under the leadership of the Party and the Ministry of the Interior, which oversees the religions, praised at length the doctrine and action of the Catholic Church in Laos, and in his turn developed the ideas put forward by Pope Francis, telling of what the nation expected of this Church for the good common. The Apostolic Nuncio Paul Tschang In-Nam, himself deeply rooted in the culture of East Asia, did not hesitate to take hold of that outstretched hand: he expressed his wish that harmony and collaboration will develop, so that all the people of Laos can progress in unity despite religious differences. 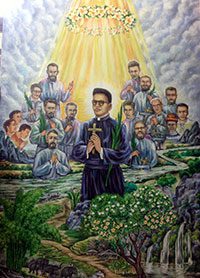 The use of languages was a sign of the profoundly Asian and Laotian character, both of the celebration and of the Church. Some 75% of it was in Laotian. The celebrant, of course, spoke his Filipino English; for the rest, the usual languages of this little corner of Christianity were heard: Khmu, Hmong, and Vietnamese. For French and Italian, it will be necessary to wait for other celebrations, which will be held in due time in Europe.

And to sum up this memorable day? Here is a humble and very small Church that dares to publicly affirm its existence, its pride and its immense respect for those who in the last century have moistened with their blood the seeds of the Gospel planted in Laotian soil. Here is a Church which will no longer hide itself, and which will find its place more and more every day in the bosom of the nation and of the whole of Christendom.