By Shari Beidiger, Originally Published in the Rivard Report 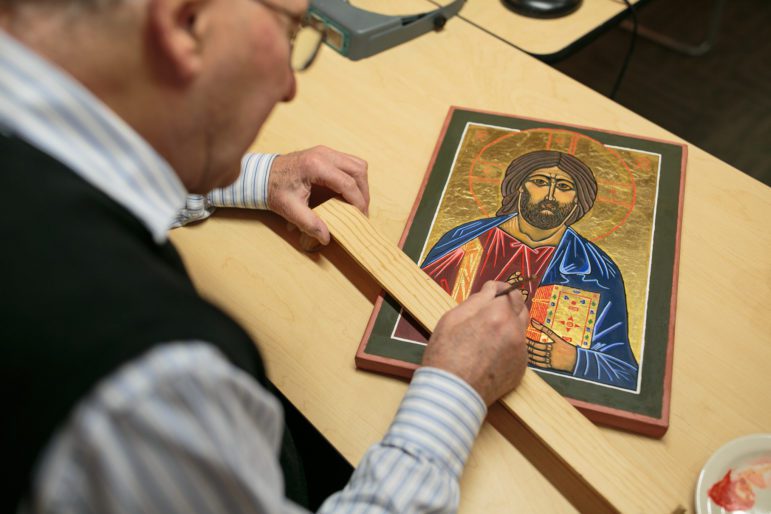 A top down view of Fr. Clyde Rausch working on one of his most popular icons. Photo: Scott Ball/Rivard Report

The story is as old as time: A young mother due to give birth is forced to seek refuge in a lowly manger. Angels appear to shepherds in the fields and a bright North star guides wise men to the place.

“They spread the word concerning what they had been told about the child. And all who heard were amazed.”

Retold, reenacted, and chanted countless times this month – from church pulpits and grottos to private homes and school stages – the story of Mary, Joseph, and baby Jesus has taken many forms in its telling during this Christian Advent season.

At the Oblate School of Theology, San Antonio’s 100-year-old seminary and retreat center that attracts people of all faiths from around the world, one man has retold it through the ancient tradition of “writing” icons.

Using egg tempera paints he mixes himself and applying them to a gesso board, as is the iconographer’s tradition, Fr. Clyde Rausch, a Missionary Oblate of Mary Immaculate (OMI, the religious order that founded Oblate), paints people and events of the Bible in his tidy studio overlooking the serene grounds at Oblate.